The Best Publicized Sinking Ship Since the Titanic

Now, the bad news -- they aren't hiring anybody that actually does that whole prosecuting thingy that is typically the point of having a District Attorney's Office.

The Lykos Administration this week hired former-228th Court Coordinator and Chief of Staff for Congressman Ted Poe, Heather Ramsey Cook to hold the title of "Community Liaison."  Loosely translated, a "Community Liaison" is someone whose job it is to make the Office look better within the community.

Now, I knew Heather back when she was Poe's Court Coordinator, and I think she's awesome.  She did a great job as a coordinator and kept the court running like a well-oiled machine.  I have no doubt that she will do an excellent job in whatever she seeks to do.

But my question here is what exactly is it that she is needed to do at the District Attorney's Office?

I had initially heard that Heather was coming on as an assistant to Hannah Chow, which begged the question: "An assistant to help Hannah Chow do what, exactly?"  Isn't Chow the one whose two major accomplishments thus far have been placing water coolers throughout the Office and dressing in a ceremonial robe to fire a Child Abuse paralegal?

Why does the Harris County District Attorney's Office need a Community Liaison when they are hemorrhaging prosecutors?  Wouldn't that money be better spent hiring one of those law-degree-holding prosecutorial types that can get a "to do" done and help administer that Rule of Law stuff that Lykos likes to mention?  Right now misdemeanor prosecutors are being "strongly discouraged" from taking the Comp Time that they rightfully earned (which seems like might be bordering on breaking some employment laws to me), while the upper Admin is spending money on people to help make Lykos look better.

To me, Lykos' spending habits are obscene, yet not surprising.  We are talking about an Administration that values good Public Relations over all other goals -- including Justice, after all.  I mean, at some point, you do have to just kick back and applaud the absolute shamelessness that Pat Lykos exhibits while promoting herself in lieu of actually doing her job.

Except, it isn't worthy of applause.  Criminal Justice suffers as a whole.  A prosecutor shortage is not good for anyone.  Those phone calls that need to get made that could help exonerate a defendant aren't getting made.  The extra work that needs to be done to get ready for trial isn't getting done, either.

But Lykos doesn't care.  Her publicists have done a good job of making her look damn appealing.

That's what she taxpayer money pays them for, after all.
Posted by Murray Newman at 8:37 AM 64 comments:

Just put up a new Chronicle blog post on some things that many criminal defendants do to sabotage themselves when they come to court.  You can read it by clicking here.
Posted by Murray Newman at 9:36 PM 4 comments:

Please join me and Todd Dupont for tonight's Reasonable Doubt at 8:00 p.m.  Our guest will be defense attorney Norm Silverman.  As always, you can watch it on live streaming video by clicking here.

As a side note, there is no truth to the rumors that Norm, Cunningham and I are starting the Three Bald Guys Law Firm, despite what the picture indicates. 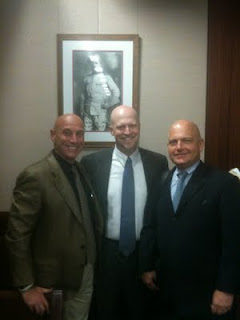 An Anonymous Open Letter to the Pat Lykos Administration

I posted a new article on the Misdemeanor Bond schedule if anyone is interested in reading it over at the Chronicle Blog.  You can check it out by clicking here.
Posted by Murray Newman at 8:48 AM 3 comments:

As many of you know, my friend and and DWI lawyer extraordinaire, Tyler Flood and I recently started a law partnership up in Bryan/College Station.

We've been doing a case or two here and there over the past year, but I look very forward to getting back by my hometown more often.  It is always good to go back and visit old friends.

You can check out our website here and on Facebook by clicking here.
Posted by Murray Newman at 8:11 PM 10 comments: