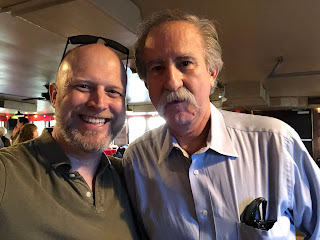 My good friend and fellow defense attorney, Ricardo Rodriguez, passed away on Friday.

I've heard that he had some health issues that were complicated by the COVID virus, but I haven't confirmed that.  The last time I saw him -- which doesn't seem like was all that long ago -- he seemed healthy and happy.  His sudden passing is a tremendous shock and a huge loss to all of us who knew him.

I posted about his passing on my personal Facebook page and the reactions to his death were all the same.  Everyone was heartbroken and shocked.  Everyone talked about what a gentleman and honorable man he was, and how he was kind to everyone he met.

He deserved every last one of those accolades and then some.  He was a fixture and a giant of the Harris County Criminal Justice System.  He was a man who embodied Character.  And he was definitely a man who was a Character.

I first saw Ricardo Rodriguez when I was an academic intern working in the 209th District Court during the summer of 1998.  I didn't meet him then, but he was hard to miss if he was in the room.  He was tall and skinny, dressed in sharp suits and even sharper boots, coupled with jet black hair and his trademark mustache.  He moved through the courthouse with the confidence and ease of a lawyer who was willing to throw himself headfirst into any case with full gusto.

I remember thinking that if they ever made a movie about this place, that dude with the mustache was definitely going to be a big part of it.

Although I wouldn't really get to know him for another few years, I gathered quickly that he was one of the attorneys who took on death penalty cases.  That was, and is, a pretty elite group of lawyers in Harris County, in my mind.  As a Spanish speaker, Ricardo would handle a great many death penalty cases during his long career in Harris County.  He knew his business and he was good at it.  I knew his reputation as being a good and hard-working lawyer before I met him.

In 2002, I was promoted to the rank of Felony Two and my first assignment was in the 228th District Court, which at that time was presided over by Judge Ted Poe.  Ricardo and Rachel Capote were the two main contract attorneys in the 228th, and that's where I first met them both.

For those of you who came after Judge Poe retired from the bench and headed to Washington as a U.S. Representative, you will have to take my word for it when I tell you that he was an extremely intimidating judge.  He was well-known in the media for being tough on crime.  He was well-known in the D.A.'s Office for having extremely high expectations for the prosecutors in court.  He was deadly serious on the bench and he exhibited no patience for foolishness or incompetence in his courtroom.

As a brand new Felony Two, I was very excited about being in his court.  But I was also very very nervous.  If Judge Poe was on the bench, I spent the morning concentrating deeply on just not screwing up.  I was very quiet back then, and Ricardo initially took my silence as either a lack of personality or maybe even a little bit of snobbery.

I remember standing by the jury box one day when he came up to me and said: "Murray, brother.  We need to loosen you up.  You're so tense.  You don't ever say anything."

I remember thinking "Me?  No one has ever accused me of not saying anything."  I didn't want him to think I was a snob.  I started telling him how nervous I was being in front of Judge Poe.  He nodded sympathetically and said that Judge Poe wasn't that strict and I needed to relax.

And I did.  Slowly but surely.  I looked at the 228th like the song says about New York City.  If I could make it there, I could make it anywhere.  The more familiar I got with the court and with the extremely intimidating Judge Poe, the more loose and funny it became in the courtroom.  Although we didn't get to the level where we were cutting up when Judge Poe was on the bench, the dynamics between the prosecution, the court staff, and the defense bar were a very fun environment.

The leader of that pack was Ricardo.  He was the old hand with all the confidence in the world, but he was so nice -- so fostering to those of us who didn't quite know the ropes.  When Paul Doyle came in as a new Felony Three, the courtroom had the atmosphere of a sitcom.  Ricardo would exclaim "Que gacho!" periodically, and I had no clue what it meant.  But he would be so animated when he said, I would do it too.  He had to tell me I was using the phrase wrong.

On a side note, I finally looked up what "que gacho!" means before writing this post and saw that it directly translates to "how awful," which is a perfect phrase to describe how the courthouse community all feels about losing him.

I tried my first murder case against Ricardo and in front of Judge Poe.  That's a thing I'm very proud of.  That was some very intimidating stuff.  The case was out of LaPorte and it dealt with a body found in the trunk of a burning car.  It was largely circumstantial and Ricardo was more than happy to rattle my cage by pointing out that I had a big problem proving it.   The case got a whole lot better when the Defendant's girlfriend decided to testify against him.

In the many years that followed, Ricardo would always shake his head and note "I had you 'til his girlfriend flipped on him."  He was right about that.  The guy had a previous manslaughter conviction so once the jury convicted him, the punishment phase was going to be ugly.

Ricardo did what good defense attorneys do when they don't have anything to work with -- he preserved the hell out of the record by objecting to every single thing I did.  He objected to me doing the predicate wrong on introducing Judgment and Sentences until I had to get out my D.A.-issued predicate manual and read the predicate word for word.

And if I didn't get it right, Judge Poe sustained every objection Ricardo made pointing out my screw-ups.  He even objected to the ink not being dark enough on the clerk's certification stamp on the paper.

We bonded through it.  We became good friends.  I knew all about his family and his elderly father whom he loved very dearly.  He talked of Laredo and his service in the Army in Vietnam.  He brought pictures from his days in the military.  In many of them, he was wearing a large bandage on the side of his neck from a grazing wound from enemy fire.  He knew my dad had served in Vietnam and he always asked how my dad was doing, every time I saw him.

He was one of the funniest, most cheerful people I ever met.  His self-deprecating stories about his dating life always was a hot topic of conversations after a weekend in court.

Every time I saw him, he'd put his hand on my shoulder and call me "brother."  He always asked about me, my family, everyone, everything.  We'd always talk about going to get crawfish together.  We would go do that on occasion when I was in the 228th.  I wish we had kept up with it as years went by.

I can think of a million Ricardo stories that were all so funny and showed what a good man and good friend he was.  Based on the reactions on Facebook, I think we all have those stories about him.

He retired from practice about two years ago and he was extremely excited about leaving the CJC for his family ranch in Laredo.  His going-away party was huge, attended by retired and active judges, prosecutors, and defense attorneys who came to give them their best wishes.  We were all sad to see him retire and leave Houston, but he was so happy about it that we couldn't help but be happy for him.

It is heartbreaking that he didn't get to enjoy that well-deserved retirement longer than he did.  Nobody deserved it more than he did.

He was a true gentleman, a courtroom warrior, and a beloved friend.

Rest in peace, Ricardo.  You were the best of us.

Posted by Murray Newman at 6:03 PM

Great man. Both of us being from the border, we talked about Laredo quite a bit, especially when I had river cases there.

As you can imagine, his VN experience was understated by him.

Thank you, Murray. Everything you say is beautiful and true. I loved Ricardo and had some stories of my own from working with him in Judge Poe’s court. Thank you for this tribute and may Ricardo enjoy eternity with his beloved father, mother and siblings.