Showing posts from March, 2009
Show all

By Murray Newman - March 31, 2009
In the midst of budget woes, and the Office being short-staffed, Pat Lykos apparently decided that this morning (in the middle of normal docket call hours) would be a great time to schedule a CLE . For those of you outside the biz, a CLE is a Continuing Legal Education class where attorneys receive training in the legal field. There is nothing unusual about the District Attorney's Office putting on an "in house" CLE course so that the prosecutors can keep in compliance with their required amount of hours received in training. In the past, the CLEs were usually taught by senior prosecutors on a variety of topics ranging from jury selection to cross-examination to closing arguments to prosecuting family violence cases to child abuse cases, etc. And they were always held in the afternoon so as to not interfere with the morning dockets which pretty much require all three prosecutors in the court being present. Not so under the Lykos Administration. Rather than uti
21 comments
Read more

Thanks to the Houston Press

By Murray Newman - March 31, 2009
Many kudos to John Lomax of the Houston Press for writing something that the Houston Chronicle doesn't have the courage to with this article .
14 comments
Read more

By Murray Newman - March 30, 2009
I'm proud of my service at the District Attorney's Office. I make no apologies for that. What has transpired in that Office over the past 90 days has been absolutely devastating to that Office in ways that not even the biggest Pat Lykos detractor (um, that would be me) could have imagined. Her actions since last Thursday have gone far beyond even the worst case scenarios that I could have imagined. As a prosecutor, I was always used to being insulted by Defendants, Defense Attorneys, and often the Media. Sometimes making the right decision meant making unpopular decisions and that came to as part of the job. What I never had to deal with as a prosecutor was my boss encouraging me to fail to do my job. But under the Lykos Administration, that's exactly what prosecutors are having to do. After the absolutely disgusting and morally reprehensible actions by Lykos against prosecutors Mark Donnelly and Rifi Newaz on Thursday, there was a follow up by Lykos '
19 comments
Read more

By Murray Newman - March 26, 2009
Sorry in advance, folks, but this one is going to be a long one . . . During my career at the HCDA's Office, I had the pleasure to work with two (amongst many) outstanding prosecutors -- Mark Donnelly and Rifi Newaz . Mark was was Three Man when I was a relatively new Felony Two in the 185 th District Court and Rifi was my Three when I was a Two in the 209 th , right before I was promoted to Felony Chief. Mark is the type of prosecutor that nobody has any complaints against. A brilliant and talented attorney who could write the book on Diplomacy, Mark exhibited a maturity beyond his years from the second he walked in the door of the D.A.'s Office. He was excellent in trial. His knowledge of the law and his common sense when assessing cases was unparalleled. He was the type of prosecutor that nobody could have a complaint against. He patiently listened to any issues that a defense attorney may bring to his attention and he looked in to every aspect of every case. Mark
106 comments
Read more

By Murray Newman - March 25, 2009
I learned last night from Casey O'Brien that former Division Chief, Terry Wilson passed away after a long battle with cancer. Terry had the unusual distinction of being a member of the Harris County District Attorney's Office on two separate occasions. He initially retired as a Division Chief in the late 1990s, and then returned as a consultant under the Rosenthal Administration, working on office policy issues and international extradition matters. It was during his stint the second time that I got to know him a little bit. Former Assistant District Attorney Ted Wilson (no relation to Terry) described Terry to me in an e-mail this morning: I first met Terry in law school. He was a year ahead of me but we did share a few classes. We became friends and I would pick his brain every chance I had. He was an outstanding student and it was fun to listen to Terry when some professor tried to outsmart him in class. They never succeeded. Terry came to the D.A.'s office a ye
14 comments
Read more

Memo to the Gang: Rotate Your Peeps

By Murray Newman - March 24, 2009
Now, I know that since the vast majority of the Gang Who Couldn't Shoot Straight haven't been prosecutors during this millennium that it probably stands to reason that they are currently unaware of the biggest internal enemy the District Attorney's Office faces. Burnout. More specifically, burnout at the level of Felony Threes. I've explained the job duties before, but I'll do a brief recap (on the off-chance that you are as bad about finding articles in the archives of a blog as I am). The Felony Three is the foot soldier of each District Court. They pull the docket every morning. They "screen" each new case, writing a Defendant's criminal history on the front of the file, as well as a brief synopsis of the case. If there are offense reports to be ordered, they do it. If there are preliminary calls to be made to Complainant's, they get to do that too. During court, they normally have to fill out the majority of plea paperwork, and then stand
10 comments
Read more

By Murray Newman - March 16, 2009
Major kudos today for HCDA Juvenile Division Chief Bill Moore for saying what plenty of Defense Attorneys and Prosecutors have been thinking and saying for a long time. In a report on KHOU , Moore addressed the felony criminalization of "graffiti" by referring to it as a " cop out by schools and police" who seem more than willing to saddle a school aged kid with a felony conviction for doodling on their desk or a bathroom wall. While Bill is just addressing the graffiti element of crimes that occur in school, I think he has identified the tip of the iceberg when it comes to the handling of kids and the things that they do in schools today. I don't think that it is any stretch of the imagination to say that things that you and I would have gotten swats on the rear end for when we are in school are now things that get kids involved in the Juvenile Justice System. And the bottom line is that it has become beyond absurd. I graduated from high school in 1991. B
28 comments
Read more 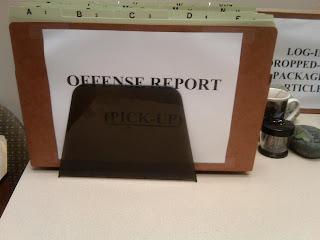 There appears to be a new addition at the front desk on the 4th floor of the D.A.'s Office.
8 comments
Read more

Just a Couple of Friendly Suggestions

By Murray Newman - March 12, 2009
With long-awaited and much heralded arrival of Offense Reports for the Defense Bar last week has come a lack of consistency and some confusion on the proper way to administrate the actual release of those offense reports: -some courts just turn over the offense report upon a verbal request from the defense attorney. -some courts have a pre -printed form entitled "Defense Request for Copy of Offense Report". -some courts are requesting a formal Discovery Motion be filed before turning over the offense reports. I don't think that a Discovery Motion is appropriate, because offense reports are work product, and not technically discoverable. From my perspective, I think the middle option is probably the most reasonable course of action in turning over the offense reports. A short form with the Defendant's name and Cause number on it, followed by standard language that assures the D.A.'s office that an attorney is in fact the Attorney of Record, and is requesting
12 comments
Read more

By Murray Newman - March 12, 2009
Congratulations to Pat Lykos for announcing a new policy of testing all forensic evidence in cases where it is "relevant and available". In the Chronicle article, she also again states her desire to have a regional crime lab, stating: "You cannot expect a police department, no matter how large, to oversee a crime lab". I agree with her completely on this particular issue, and I think it is an extremely noble idea. It was also one echoed by pretty much all of the candidates in the 2008 D.A.'s race. I will be curious to see how quickly this idea is put into place, and more interestingly, where the money is going to come from to pay for it.
5 comments
Read more

What the Hell is Going on Over There (AKA Are you missing Bert Graham yet)?

By Murray Newman - March 10, 2009
As we enter into month 3 (of 48) of the Lykos Administration, the Gang Who Couldn't Shoot Straight (henceforth referred to in this post as "the Gang") continues to astound me with the ineptitude coming from the top of their food chain. Now, before I go too far into this post, I want to acknowledge that this post will probably be of little to no interest to anyone other than Assistant D.A.s or ex-Assistant D.A.s, but if you are a taxpaying citizen of Harris County, it should actually interest you as well. As the (voluntary) departures from the HCDA began last month, it was not surprising to see that the official reaction from the Lykos gang has been "no biggie". In the past few weeks, Sylvia Escobedo , Warren Diepraam , Michelle Mishoe , and Billy Skinner all decided to head for greener pastures. Now, Mishoe and Skinner were both relatively junior prosecutors, but the departure of Sylvia and Warren was an example of the Office losing two very senior Felony
22 comments
Read more

Collegiality, Diplomacy, and the Aspiring Yodas

By Murray Newman - March 08, 2009
A week or so ago, I sat down and had drinks with my friend, Pat McCann , and a prosecutor-who-shall-remain-nameless. There was nothing unusual about the fact that I was having a beer with Pat, other than we were having the drinks over at Picazo rather than Char for some strange reason. During our conversation, as we often do, the talk turned to the overall state of affairs at the Criminal Justice System, and Pat made the comment that over the past year, he felt that there had been an increase in the " collegiality " between prosecutors and defense attorneys around the CJC . I agreed with him, and we talked about the different factors that had contributed to that, which included Rosenthal's departure, the subsequent vulnerability of the HCDA office, Mark Bennett's and my respective blogs, and the passing of some of our friends from the Defense Bar. Now, before some of you start yelling "how can there be collegiality since prosecutors and defense attorneys
17 comments
Read more

By Murray Newman - March 02, 2009
Today proved to be the arrival of a most anticipated day for the Defense Bar, as the Harris County District Attorney's Office finally began the process of providing copies of offense reports to Defense Counsel. Now having been a member of the Defense Bar for a little over two months now, I do feel slightly disingenuous applauding the arrival of the ORs so wholeheartedly. I've only been forced to take notes for two months, while most members of the Defense Bar have had to do so for years, after all. That being said, I was extremely excited to be the charter member in the 177 th District Court this morning to get to sign off on the confidentiality agreement one signs in getting an offense report. Those who read this blog know that I am no fan of Pat Lykos , but I have to give the D.A. credit for pushing through this initiative and getting the ORs out there. Her move actually will make the criminal justice system move at a faster and more effective pace. It was an idea t
9 comments
Read more
More posts