Showing posts from February, 2017
Show all

Not "If" but "When:" A Lesson in Impropriety 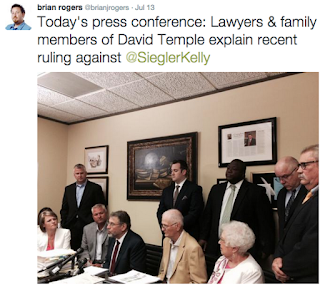 As the Harris County District Attorney's Office begins to settle in under the new Administration of Kim Ogg, the biggest question still left open is how Ogg will dispose of the murder case against David Temple.  Temple was granted a new trial in November of last year, following his 2007 conviction for the murder of his pregnant wife, Belinda. Since Ogg has taken office, I have written several posts arguing that the Ogg Administration should recuse Harris County from further involvement in the case due to multiple conflicts of interests.   One of the more notable conflicts that Ogg has is that she hired a former member of Temple's defense team, John Denholm, as part of her upper Administration .  In addition to Denholm, she also hired former private investigator, Steve Clappart, as her Chief Investigator and he also did defense work on Temple's case. This picture shows the two of them at a press conference with the rest of Temple's defense team. For those of you who
52 comments
Read more

By Murray Newman - February 18, 2017
My friend and fellow defense attorney, Jeff Ross , stopped me in the hallway the other day to let me know that he had joined the Blawgosphere recently and he asked me to take a look at it. I checked it out and for those of you in and out of the Harris County CJC, I highly recommend it. Jeff's website is called "Show Me the Justice" and can be reached by clicking here . Jeff is taking on the job of keeping track of verdicts in the courts and he's welcoming comments (including those dreaded Anonymous ones) on Judges, Prosecutors, Defense Attorneys, and Police Officers. Because Jeff is an extremely good guy, he's only posting the name of the winning side of the jury verdicts.  The website isn't designed to embarrass anyone.  It also doesn't name anyone who is being complained upon. All in all, it is an entertaining website.  You should check it out.
Post a Comment
Read more

By Murray Newman - February 15, 2017
Most people who read this blog know that I have been a big fan of the majority of  new hires under District Attorney Kim Ogg's Administration .  Most of these hires, however,  came from the Defense Bar, and that has created a logistical issue on a sizable amount of cases. When a defense attorney leaves his or her defense practice, it is extremely difficult to do so with an instantaneous "clean break."  Cases pend for varying amounts of time and if an attorney is leaving his or practice to join the prosecution, the odds are that there will still be some cases pending at the time of that transition. Since said defense attorney is leaving his or her practice to join the District Attorney's Office (aka "the other side"), it creates a per se  conflict of interest for that D.A.'s Office to remain the entity in charge of prosecuting the accused.  Whether that defense-attorney-turned-prosecutor actually knows any material information that would be dam
23 comments
Read more
More posts