After wrapping up her insanely huge waste of time weeks-long inquisition into finding what prosecutors might be mocking her behind her back (which landed her in an excellent article in Texas Monthly written by Michael Hardy, in case you haven't seen it), Harris County District Attorney Kim Ogg has apparently found herself getting bored by the pandemic.

I mean, sure, the Judges, the Defense Bar, the Prosecutors, and Law Enforcement are all working long hours to figure out the complicated balancing act between public safety and Constitutional rights, but Kim is a multi-tasker.  She's got time to oppose PR bonds, give three press conferences, and hunt down disloyal prosecutors like the dogs that they are, all before noon!  Press Conference Kim has got so much time on her hands that she feels like doing a little shopping.

Today, I was greatly amused to receive an e-mail from "DA Kim Ogg" entitled "Continued Support for Local Businesses."

To be fair, the e-mail came from Ogg's campaign e-mail account and not her official government e-mail address (the one she used when she was sending out an office-wide e-mail telling her subordinates who they needed to vote for in the State Bar election).  However, the e-mail did arrive at 10:23 a.m., which was when the rest of the prosecutors at the Office were busily dealing with a healthy Monday morning docket.  That's interesting timing, because clearly the e-mail was nothing more than a rather lame campaign stunt and it was definitely being sent during work hours. 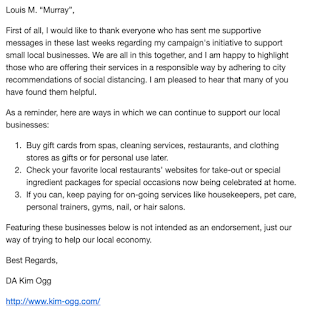 In the e-mail, the artist-formerly-known-as-Press-Conference-Kim has apparently switched titles to Chamber-of-Commerce-Kim, as she encourages the reader to please consider shopping locally, noting her "campaign's initiative to support small local businesses."

Some may wonder,"What exactly does a District Attorney have to do with starting an initiative to support small local businesses?"  Well, I've done the research, and it turns out the answer to that question is "nothing."  However, far be it from Chamber-of-Commerce-Kim to pass up an opportunity to use her "DA" title to encourage people to specifically shop at three of her preferred stores.

"DA Kim" gives a shoutout to The Harmonious Kitchen (which,  I believe would be a creative way to describe the exact opposite of the D.A.'s Office's current workplace atmosphere), Vincent Ford's Custom Men's Apparel (um, okay), and Pizzitola's BBQ (which DA Kim notes "has the best ribs in Houston!  Don't believe me?  Go give them a try!").   I'm not saying anything negative about these places, but Kim's awkward endorsements have kind of given me a case of the giggles.  Like, now I have this visual image of Kim staring awkwardly into the camera and yelling that "Harris County D.A. saves you money!!!" as she jumps in the air with a handful of currency.

I don't think there is necessarily anything illegal or particularly wrong with Kim hawking products like Snoop Dog selling Hot Pockets . . . 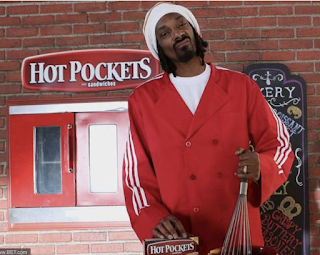 (And yes, this is apparently a real thing.)

. . . but it just feels a little unseemly, doesn't it?  Especially when she refers to herself as "DA Kim Ogg" in her advertisement's signature?

All of this, of course, has inspired me to think of other Kim Ogg-worthy commercials:

"Got a loud co-worker in the next room that's always yelling at people about them not knowing when she takes her lunch hour?  Try Kim Ogg Earplugs.  They are fit for a King.  A Vivian King."

"First Assistant being a little too argumentative with you over the right thing to do?  Try Berg-Be-Gone in an aerosol can.  One spray and he'll be out of your office faster than Andrew Smith refusing to commit perjury for you.  Now in unscented!"

"Disruptive prosecutors talking about you behind your back?  Try the Bark Internet Monitor for Parents.  It will tell you what's really going on with your employees' personal cell phones and computers."

"Got former employees suing you for a couple of thousand dollars for wrongful termination and/or unemployment?  Give the Mize Law Firm a call.  Tell her Kim sent you!"


I could literally do this all day, but I've got to go.  I've been eating too much Pizzitola BBQ and don't fit in any of my old suits anymore.  I'm going to give Vincent Ford a call for some custom men's apparel and then start working on my diet with the Harmonious Kitchen.
Posted by Murray Newman at 3:05 PM 4 comments: