Showing posts from August, 2018
Show all

Technical Issue with the Comments

By Murray Newman - August 25, 2018
If you've made a comment on the blog over the past couple of months and it didn't get published, I owe you an apology. Apparently, something was going on with my spam filters and it swept a lot of babies out with the bathwater when it came to blog comments.  I think I have the problem fixed and I think I've published all of the old comments that didn't post right away. I just assumed that since I hadn't written much this summer that nobody had anything to say about the few things that I have written.  I firmly believe that the comments are the best part of this blog, so I'm glad to see them still coming in.  There are some especially interesting ones (with accompanying statistics) on A Personnel Problem .
3 comments
Read more 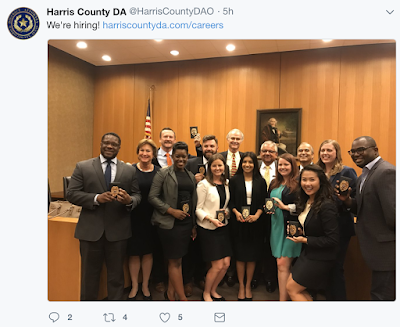 My, how times have changed. Back in the summer of 1998, I was between my 2nd and 3rd year of law school at the University of Houston.  That's roughly the academic time in a law student's life when the big law firms start coming to campus to do interviews with students.  Nervous law students hoping and praying to get hired on with one of those White-Shoe firms wear the same damn suit for days in a row as they talk to all of the legal powerhouses from around the city, state or country.  There is a notable increase in the general level of stress around the school. In many ways, it was like league dating.  If you wanted to even get an interview with one of the top-tier firms, then your grades needed to reflect that you were a top-tier student.  Some of the smaller firms were a little looser with their standards.  I remember hating that time of law school because all of my normally laid-back friends suddenly became hyperactive stress monkeys. For me, it was a little less stres
61 comments
Read more
More posts