Showing posts from February, 2019
Show all

By Murray Newman - February 15, 2019
Local media is reporting some pretty shocking revelations this afternoon about the botched Houston Police Department raid that occurred on January 28th of this year.  As you probably already know, that raid left five HPD officers wounded and two citizens, Dennis Tuttle and Rhogena Nicholas, dead.  In the days following the raid, there were some early indications that there was more to the story than just a simple search warrant execution that had resulted in a gun battle. For starters, the affidavit supporting the issuance of the search warrant had been reliant on the word of a Confidential Informant (CI) who had allegedly told the police that he had purchased an amount of heroin from a male at 7815 Harding Street.  The CI also allegedly told the police that the male at the residence had more heroin inside the house and that he had been in possession of a 9mm handgun. Officers used that little tidbit about the 9mm to ask the magistrate who signed the warrant to authorize them to do
27 comments
Read more 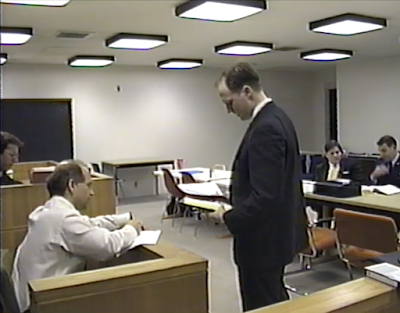 Since I'm a firm believer in the premise that you shouldn't make fun of others unless you are willing to make fun of yourself, I will share the following awkward memento. This is an awkward screen grab from an even more awkward video from my 1998 Criminal Trial Advocacy class at UH.  In this exercise, I'm trying (and failing) to learn how to admit a photograph into evidence. My sponsoring witness is David Cunningham. The pained looking judge on the bench is George Murphy. I think I would rather pass a kidney stone than watch how bad I was back then, but I have to give major kudos to Dave, George and (not pictured) Judge Belinda Hill.  This was really a wonderful class that gave some very real and very practical advice to aspiring trial lawyers.  It's been 21 years since this picture was taken and I'm honored to be able to say I've gone on to practice alongside (and in Judge Hill's case, in front of) these great lawyers. I'm also glad that I
3 comments
Read more

The 2020 Race for District Attorney Heats Up, Already 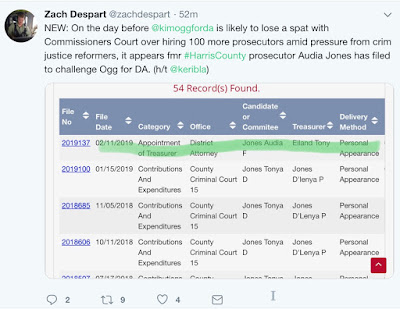 Houston Chronicle  reporter Zach Despart sent out a Tweet this evening that has Harris County prosecutors abuzz: Despart noted that attorney Audia Jones has filed a Notice of Treasurer in the 2020 race for District Attorney.  Jones, who recently left the Harris County District Attorney's Office, has been very vocal on her Facebook page about her vision for the Criminal Justice System.  Her posts have also been critical of the D.A.'s Office's current administration. Jones is married to 180th District Court Judge DaSean Jones, who just took office on January 1st of this year.  In the event that Jones were to win the race for District Attorney, there would probably be some question as to whether or not her husband could preside over cases prosecuted by the District Attorney's Office.  In all honesty, I'm not sure what the answer to that question would be. While Audia Jones is the first one to definitely throw her hat in the ring to run for District Attor
22 comments
Read more

By Murray Newman - February 11, 2019
The Harris County Criminal Justice World was shocked and saddened today by the unexpected and untimely passing of recently-elected Judge Cassandra Hollemon.  Judge Hollemon held the bench of County Court at Law # 12 after winning election this past November.  I wish that I could offer some personal insight into Judge Hollemon's passing, but sadly, she passed away before I ever had the opportunity to appear before her. In the 20 years since I've been practicing law, I've never known of a Harris County Judge who passed while in Office.  I believe that the last Harris County Judge to die in office was 230th District Court Judge Joe Kegans in 1997.  It is a significant and sad event. Although I didn't know Judge Hollemon, I am sorry that we did not get a chance to know her and see what she would have accomplished on the bench.  My sincerest condolences go out to her family and friends.
Post a Comment
Read more

By Murray Newman - February 10, 2019
Harris County District Attorney Kim Ogg found herself in an unusual position last week when her request for funding 100 new prosecutors was met with harsh criticism from the Texas Criminal Justice Coalition , a progressive group that normally is one of her biggest supporters.  As noted in the Houston Chronicle , Ogg's request for additional prosecutors seems to have been interpreted as some sort of act of war by TCJC's Jay Jenkins. "Simply adding prosecutors is the strategy that got us here in the first place, with this mentality that the only thing we can spend money on is the police and prosecutors," said Jay Jenkins, project attorney with the Texas Criminal Justice Coalition. Apparently, Jenkins is so concerned that if Kim Ogg were to get a whole bunch of new prosecutors, the D.A.'s Office would just go out and start prosecuting things unnecessarily so that those new prosecutors won't get too bored.  That's a silly notion if you've paid attention
13 comments
Read more
More posts