The Ever Changing Election Field

As I mentioned with this post back in February, the 2012 Election Season has begun preposterously early this time around, with most of the activity focusing on which Republicans are going to be vying to retake the criminal court benches lost to Democrats in 2008.  Here we are five months later and the field has already changed significantly from back in February.

The 176th District Court
Last we looked here, no one had thrown their name in to be the Republican challenger to Incumbent Judge Shawna Reagin.  Since then, former prosecutor and criminal defense attorney Stacey Webb Bond has announced that she will be running as a Republican.

The 177th District Court
There have been no official changes to this race thus far, as Republican Ryan Patrick will be running for the spot against Incumbent Judge Kevin Fine.  There have been some rumors that Judge Fine may draw an opponent in his own primary.  I'll keep you posted on this one.

The 178th District Court
I'm not sure if Roger Bridgwater has made it official that he will be attempting to retake his bench from Incumbent Judge David Mendoza.  The word on the street is that Patricia R. Lykos is not too happy about the idea of Roger running because it conveys the idea that people are "jumping ship" from the Office.  Um, yeah, Pat, half your damn Trial Bureau leaves and you don't bat an eye, but when the guy who sits in his office and does nothing all day wants to be a judge, then you get worried?

The 179th District Court
This is still facially the same race, as Republican Kristin Guiney is the only listed challenger right now against Incumbent Judge Randy Roll.  However, there are rumors that Lana Shadwick is going to run as a Republican.  Shadwick is apparently hoping her ex-husband's name will bring her a judgeship, and her flaky history and resume of bouncing from job to job and position to position within the D.A.'s Office has fellow-blogger Mark Bennett declaring this to be "Christmas in July".

The 337th District Court
This one has been a change, as it doesn't appear that prosecutor Alexis Gilbert is running for the position any longer.  However, long-time prosecutor and Chief Renee Magee is now officially running against Democratic candidate and Incumbent Judge Herb Ritchie.

The 338th District Court
A change here as well as former-prosecutor, former-judge, and current defense attorney Brock Thomas has announced he will be running against Hazel Jones to retake his bench after the 2008 elections.  Joe Vinas had been slated to run for this bench against Judge Jones, but deferred to Brock and switched to the 174th race.  I'm glad to see Brock running again.

The 339th District Court
This race remains unchanged, as well.  Special Crimes Chief Brad Hart is still the only candidate currently listed to be running against Incumbent Judge Maria Jackson.

The 351st District Court
As I mentioned in the last post, I can't imagine Incumbent Judge Mark Ellis drawing a Republican challenger in the primary, and I haven't heard of any Democratic candidates signing up to run against him either.

Join me and Todd Dupont for tonight's Reasonable Doubt at 8:00 p.m.  Our guest will be defense attorney, legal commentator, and HCCLA President-Elect Chris Tritico.

As always, you can tune in to watch it live streaming by clicking here.
Posted by Murray Newman at 8:37 AM 12 comments:

So, you're running late for court and desperately looking for a parking place, and you come across this sign in front of a parking lot (which looks like it has been carpet bombed); 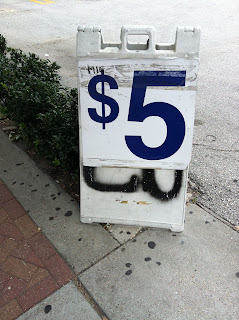 Your interpretation of the sign leads you to believe that:

Well, if you guessed "C", you would be correct.  Sadly, I was running late and shelled out the additional $10 more than I expected rather than go look for another spot.

The non-apologetic parking lot attendant pointed out to me that the letters "MIN" are written above the dollar sign, so I should have known better.

As a side note, you may not want to park at the lot framed by Fannin, Preston, Prairie, and Main.  It's a rip off.
Posted by Murray Newman at 11:52 AM 9 comments:

Yesterday, I headed down to Galveston for their morning docket.

I had a pleasant drive down, going against the flow of traffic.

I was running a little late for docket, and my client called me on the drive down to say that he was running even later than I was -- a mortal sin in Harris County.

I pulled into the parking lot of the Galveston Courthouse, where there was ample (and completely free) parking within fifty yards of the front door of the building.

There were no lines to get in the building and going through the metal detectors and security probably took less than a minute.  The security screeners were polite and friendly.

There were no lines at the elevator, which was open and waiting the second I cleared security.

I went up to court and learned that they had already called docket.  I explained to the court coordinator that my client was running late.  She didn't even ask why.  She just told me to let me know when my client got there and it wouldn't be any problem.

I talked to the prosecutor and told her my client was running late.  No problem.  She made me an offer and handed me his file to review.  She just wanted me to let her know when he got there.

The court was hearing a civil jury trial, so we got shuffled out of the courtroom and to the back hallway, outside of chambers to finish the morning business.  A few minutes later, the coordinator let me know my client had shown up and was kind enough to escort him back to where I was so we could discuss the case with the prosecutor.

The prosecutor was very nice and listened to my version of events and told me she agreed that we needed to listen to a 911 tape before deciding what an appropriate punishment recommendation might be.  She even pointed out some potential weaknesses in the case that she saw, before I brought them to her attention.  My client explained a side fact of the case to her, and she was polite and friendly to him as she listened.

We agreed that the case needed to be reset, so I talked to the coordinator again.  She suggested a day and asked if it worked for me.  I told her it did and she said "Okay, see you then."

"Nope," she smiled.  "We're all grown ups around here.  We figure you can remember."

My client and I walked out the front door, no more than thirty minutes after my arrival.

I loved it even more when I came back to the Harris County CJC elevator bank and was greeted with this: 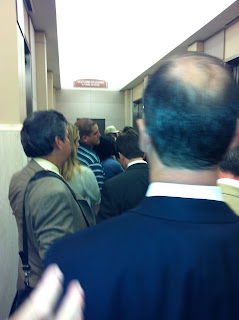 Per a suggestion of one of our loyal viewers, Reasonable Doubt has added a way to ask questions of the hosts and guests on the show on Thursdays.

If you have a question, please e-mail it to us at HCReasonableDoubt@gmail.com or contact us on Twitter at @ReasDoubt.

We look forward to taking your questions.

NOTE:  Let us know if you DON'T want us to use your name on the air.
Posted by Murray Newman at 4:31 PM No comments:

Tune in tonight for Reasonable Doubt at 8:00 p.m. with me and Todd Dupont.  Our guest will be Carmen Roe, and we'll be talking about juries, the Casey Anthony verdict, and anything else you want to talk about.

As always, you can (allegedly) watch it live streaming by clicking here.
Posted by Murray Newman at 2:22 PM 2 comments:

My prosecutor friends are probably going to yell at me for this Chronicle post on the Casey Anthony verdict, but I think it was a gutsy call by the jury, no matter how much I disagree with their verdict.
Posted by Murray Newman at 10:36 PM 16 comments:

As most of you realize by now, the Casey Anthony jury is out deliberating her fate in Florida at the time of this writing.  I haven't commented on it for a variety of reasons -- the two primary ones being that it has nothing to do with Harris County and I haven't been following it in the slightest.  I didn't even realize until about two weeks ago that the pathologist on the case, Dr. Jan Garavaglia (AKA Dr. G) was someone I knew back when she worked for the Bexar County Medical Examiner's Office back in the 1990s.

But, I also don't like talking about big media cases that I have no personal knowledge about.  Something about it just doesn't sit right with me.

My friend (and absolutely-excellent-writer-you-really-should-be-reading-his-stuff-every-day), Scott Greenfield just published a post on his thoughts about the Casey Anthony case, and I couldn't agree with his position more.  I highly recommend you check it out by clicking here.
Posted by Murray Newman at 10:50 AM 3 comments:

The Declaration of Independence

HCCLA members and all others who are interested (and encouraged) to attend will be joining in front the Harris County Criminal Justice System this morning, Friday, July 1st, at 11 a.m. to read the Declaration of Independence.  This was an event that began last year with HCCLA and is the start of a wonderful and noble tradition.

In fact, the tradition is spreading across numerous counties in Texas this year and will hopefully grow as the years go by.

I know that it is easy to get cynical in the old CJC, but I think it is important to take a moment and realize the principles our Nation is founded upon and how much the legal system and criminal justice system play an every day role in maintaining that.

Special thanks to Robb Fickman, HCCLA President Earl Musick and all the other dedicated members of HCCLA for putting on this event.
Posted by Murray Newman at 8:01 AM 3 comments: