Career prosecutor Don Smyth retired from the Harris County District Attorney's Office today, putting the end to a 33 year career as a prosecutor.
Now, as we all know from articles here and here, that this is by no means the last we've heard of our friend, Don. He's still actively campaigning as the Republican candidate for County Court at Law # 13.
And although I hope we are about to see the beginning of Don's "new career" come January 1st, I wanted to tell him congratulations on 33 years at his old job.
Don is a man of the highest character. Although he was more than eligible to retire when the Gang Who Couldn't Shoot Straight rode into town, he didn't leave. Even when they demoted him from Bureau Chief to Division Chief, he remained loyal to the people who had served under him and stayed to act as a buffer between them and the folks who knew what they were doing.
Unlike some of the other prosecutors (who in Don's position who would sell out their prosecutors to be "team players" with the New Administration), Don was known to always have his prosecutors' backs. He was a leader where being a leader wasn't exactly deemed a good quality after January 1st, 2009.
And the loyalty he showed his fellow prosecutors was returned, when in late December of last year, he decided to take on a campaign for Judge that pitted him against Lykos' Office Darling, who had been prepping her campaign for two years priors. The real prosecutors of the Office rallied around Don's campaign was able to pull off an amazing upset.
Quite frankly, it restored my faith in the idea that sometimes (just sometimes) character still matters in politics. It also showed that Don had extreme courage.
They don't make leaders like Don Smyth anymore. The District Attorney's Office was lucky to have him for nearly a third of a century.
Here's to hoping we'll have him on the Bench for many years to come.
In the meantime, Happy Retirement, Don!
Posted by Murray Newman at 5:21 PM 10 comments:

Just a programming note about tonight's Reasonable Doubt for those of you addicted to cable access television.
Todd DuPont and I will be hosting with special guest Pat McCann. Not sure what the topic is going to be yet, but I have a feeling we'll be talking some about mental health issues in the court.
Posted by Murray Newman at 2:36 PM 3 comments:

Yesterday's Houston Chronicle had this editorial in it, giving their views of Houston Police Chief Charles McClelland's ill-advised memo forbidding HPD officers from talking to Defense Attorneys without express permission from the prosecutors. As usual, the Chronicle's effort to suck up to the Lykos Administration makes it painfully apparent how little the editorial board knows about the Criminal Justice System.
But I'll get back to them in a minute.
The first thing that stands out is the response of the Chief, himself. In all honesty, I was kind of excited when Mayor Parker appointed Chief McClelland. I'm a big fan of promoting from within when it comes to law enforcement, because I think it makes for better leadership and respect between the Chief and the rest of the Department. I thought his memo was basically just a brain fart that he would retract when called out on.
I was wrong. Apparently the Chief never heard the old adage about the first thing you're supposed to do when you find yourself in a hole is stop digging.
His quote to the Chronicle astounds me.
"It makes you wonder if there's something improper going on between police officers and defense attorneys."
Are you kidding me, Chief? I knew that you weren't a big fan of defense attorneys from your memo, but did you really just suggest that your own officers are doing something improper?
And you're dumb enough to say that to the freaking media?!?!?
Well, apparently, the stupidity is contagious.
Because First Assistant Jim Leitner decided to weigh in on the topic.
Now, keep in mind, I've been taking it easy on the Lykos/Leitner administration lately because they hadn't done anything too profoundly idiotic recently. I had assumed that Lykos would disavow any knowledge or encouragement of McClelland's new policy.
I mean she is the one who campaigned on the platform of transparency, right? Surely ordering any and all police officers to clam up when it comes to defense attorneys would fly in the face of transparency, wouldn't it? I was kind of thinking old Patsy would give a statement that read something like: "Our Office would never discourage the free exchange of pertinent information between police officers and attorneys representing their clients. The Chief of police was not requested to issue this policy and our Office does not believe it to be necessary in the pursuit of truth and justice."
Nope.
Instead, she sends out Big Jim, who gives a statement that is really making me think that running out in the middle of an interview wasn't such a bad move for him, after all. Here's the Office's official position:
"Harris County prosecutors will permit willing police officers to talk to defense attorneys, but will insist on being present for the interviews."
Are you kidding me with this crap, Jim? Seriously? You're going to insist on being present in all interviews. Hmmm.
Okay, well, then I'm going to insist on being present for all of YOUR interviews with police officers. How about that?
Wait. What do you mean I can't do that? You can only do that if you're a prosecutor? Oh, I see.
Now, it's one thing when the Chief of Police who isn't a lawyer starts writing stupid crap in a memo that borders on witness tampering, but now we've got Genius Jim, the 1st Assistant of the Harris County District Attorney's Office insisting that they be present.
Damn Jim, it was less offensive when us scumbag defense attorneys weren't allowed to talk to the cops at all. Now you want to babysit them to make sure that they are only telling us what you want them to tell us?
That's some damn fine transparency you've got there, Gang.
And last, but not least, let me turn my attention to our friends at the Houston Chronicle -- the D.A.'s Pets.
They have this to say about Jim's moronic statement:
This is a good solution, one that brings defense, law enforcement and prosecution together in the same room to exchange information and facilitate the fairest outcome of a case.
I'm so glad to hear that the Chronicle Jurisprudence Department has given it a stamp of approval.
What if a defense attorney wants to ask questions of a police officer that are part of his legal strategy and he doesn't want the prosecutor to know about it? The Code of Criminal Procedure says the defense doesn't have to tell the prosecutors where they are going with a case. Why does Jim Leitner get to override that?
You know what the difference is between Leitner and McClelland, though?
Leitner is a lawyer and a former defense attorney. He should know better than to encourage that type of behavior.
Is it unethical of him? Quite possibly.
Is it stupid of him? Absolutely.
Posted by Murray Newman at 11:25 AM 23 comments:

I was a little late to the ballgame with this information, but 180th District Court Judge Debbie Stricklin did make it official today that she will be resigning her position this week. Her last day on the job will be on Friday.
I'm sorry to see her go.
Judge Stricklin, and her husband, Judge Don Stricklin are two fantastic public servants, in my opinion, and I think the Harris County Criminal Justice System will miss them both terribly. The 180th District Court has been a great environment to try cases under Judge Stricklin's tenure. I tried my first two cases as a defense attorney in that court room, and I can say I received a very fair trial both times.
Judge Stricklin leaves behind very big shoes to fill on the bench. Her knowledge of the law and her even temper will be very difficult to replace. There is no word, as of yet, on whether or not Governor Perry will replace her for the remainder of the term. Marc Brown is the Republican candidate for the bench in November. I'll keep you posted as events develop on that.
In the meantime, I wish both Judge Stricklins a very happy and well-deserved retirement.
I'll miss seeing you around the CJC.
Posted by Murray Newman at 4:26 PM 22 comments:

I was a little surprised when an anonymous friend of mine (not a police officer) sent me a copy of this memo circulated from Houston Police Department Chief Charles A. McClelland, Jr. to all HPD Officers. 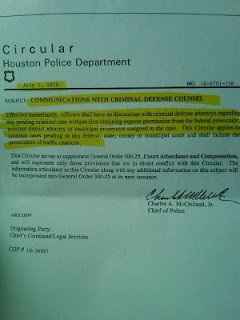 If the picture is blurry on your computer, the highlighted portion reads:

Effective immediately, officers shall have no discussion with criminal defense attorneys regarding any pending criminal case without first obtaining express permission from the federal prosecutor, assistant district attorney or municipal prosecutor assigned to the case. This circular applies to criminal cases pending in any federal, state, county, or municipal court and shall include the prosecution of traffic citations.

But when I was a prosecutor, we knew better than to ever instruct a police officer or any witness from talking to defense counsel. If a police officer's work on a case was so fragile that a phone conversation with the defense attorney could make the case fall like a house of cards, then we had a really big problem.

Telling an officer not to talk to the defense was unethical, in my opinion, and it gives an appearance of impropriety that borders on witness tampering.

If the officer didn't want to talk to the defense attorney, that was his or her business. They could expect the standard cross-examination question of "Isn't it true, Officer, that when I called you to talk about the case, you refused to speak with me?".

The good cops that I knew never had to answer that question, because they always spoke to the defense bar when called. They knew the job they had done on the case, and no call from a defense attorney was going to make that come undone.

So, the memo coming from Chief McClelland is actually doing his officers a pretty big disservice, if you ask me. The men and women who work for him are entrusted with guns and badges and the power to deprive people of their freedom, but he doesn't trust them to have a conversation with a defense attorney??

What kind of message does that send?

And by the way, Chief, you just gave every defense attorney in this county some great cross-examination material on each and every one of your officers before they even hit the stand.

They deserve better than that.
Posted by Murray Newman at 6:55 PM 36 comments: