The Game IS still ON

As I mention awhile back in this post, the Harris County Criminal Lawyer's Association and the Harris County District Attorney's Office have been training over the past month or so getting ready for their first annual Softball Game.

Everyone is invited and encouraged to attend!
Posted by Murray Newman at 1:06 PM No comments:

And Therein Lies the Problem

I remember back in 2006 when Craig Watkins won the position of Dallas County District Attorney.  There was talk about his new post-conviction integrity policy and his going after prosecutors who had failed to disclose Brady material.

I was a prosecutor back then and I recall thinking that the newly elected D.A. seemed a lot more interested in prosecuting prosecutors than he was in prosecuting defendants.  My fellow ADAs and I talked about how tense things must be in Dallas -- the mandate had changed and the prosecutors were the new bad guys.  We felt bad for the prosecutors up there who suddenly had to sweat someone going over their old trial files and maybe prosecuting them criminally for mistakes they had made.

I emphasize the word "mistakes" because that was what we -- the rank and file prosecutors of Harris County -- focused on.  I don't believe that any of us thought in terms of intentional acts done to hide things.  We thought about evidence that a police officer hadn't told us about.  Or something that we thought a defense attorney had seen in an open file that we failed to give notice of.

When we heard about what Craig Watkins proposed to do when he became District Attorney, we were offended at his ideas.  Why?  Because we failed to see that what Watkins was talking about when he wanted to go after prosecutors who failed to disclose Brady was going after prosecutors who intentionally hid exculpatory evidence -- those who were unabashed about cheating to win.

Surely, such a creature did not exist.

Sadly, in the wake of cases like Anthony Graves and now Michael Morton, we've come to learn that such creatures do very much exist.  More importantly, last Friday, we saw that a Court of Inquiry recognized that as well -- and that something needed to be done about it.

Unlike Charles Sebesta, who seems to have escaped unscathed for what he did to Anthony Graves, a Court of Inquiry held former District Attorney and current Judge Ken Anderson accountable for his actions in the Michael Morton murder case.  Judge Louis Sturns handed down the ruling against Anderson, which led to Anderson being arrested and booked in.  In his Findings of Fact and Conclusions of Law, Judge Sturns acknowledged that the probable cause he found on Anderson's cases were more than likely outside of the statutes of limitations, but asserted that those were defenses that could be raised later.

That, in my opinion, may be the most awesome thing that Sturns did.  He knows that these charges will more than likely be shot down as untimely, but he made the finding anyway.  It's kind of like the judicial way of saying, "I'm finding Probable Cause even though the Statutes of Limitations may have run because . . . screw you for what you did, that's why."

If you want to understand the full effect of Judge Sturns rightfully ruling the way he did, just look to paragraph 42 in his conclusions of law, where he noted:


Additionally, as Mr. Anderson explained during the Court of Inquiry, although Brady requires prosecutors to release exculpatory evidence to the defense, as an attorney and former prosecutor, he does not believe in the release of such evidence if it may result in freeing an individual that he believes is guilty.

As I've told laymen before in explaining Brady, the problem with prosecutors who don't turn over Brady usually lies with them not finding the evidence in question to be credible.  For instance, if a murder happens on a corner and 19 witnesses point out the Defendant, that's fine.  But if the 20th witness says that the Easter Bunny did it, that sounds ridiculous, right?

Ken Anderson (and Charles Sebesta before him) believed so much in the guilt of the person being prosecuted that he found any evidence to the contrary to be unreliable, and therefore not Brady.  Sadly, Anderson is now a judge and apparently still holds to that belief.

The bottom line is that back in 2006, I was scared of what Craig Watkins was doing.  I thought he was going to criminalize prosecutors who might have made mistakes.

I didn't believe in creatures like Charles Sebesta and Ken Anderson back then.

As one of my classier commenters pointed out on my last post:


"So post-Lykos, this is just an obituary blog an outlet for your lugubrious lamentions?"

After looking up what "lugubrious" meant, I decided that although the commenter picked a poor venue to take a pot shot, he was correct.

The blog has been slacking pretty badly lately.

There are a couple of reasons for this.

The main one is that I've been working out of state on a consulting project for this program.  I can't say anything about the details on that, however.  I've been bouncing in and out of town quite a bit lately.  Maintaining a regular practice and working on the road takes up a lot of blog-writing time, just FYI.


Being out of town also means that I haven't been in the position to get a lot of office scoop and gossip lately.

I get comments from time to time regarding complaints about the Anderson Administration.  They pretty much range from griping about the "mean girls" promoted to leadership positions within the office to a lack of decisiveness in making chief promotions last month to the delay in determining what the Administration's policy will be on Pre-Trial Diversions.

Nothing too earth-shattering, in my opinion.  At least not to the degree where I felt it would be worth much of a blog post.

However, you are always free to talk about whatever you want to.


On a side note, yes, I still have this guy.  His name is now Buddy Holly. 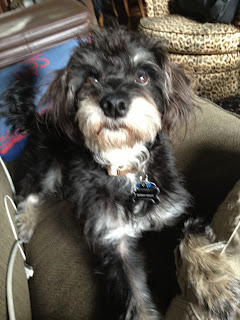 My wife was very thrilled for me to go out of town and leave her with a non-housebroken stray dog.

They are bonding in my absence.
Posted by Murray Newman at 11:14 AM 5 comments:

I first met George through Mike Hinton, who loved nothing more than getting together with George and telling stories from the old days.  His war stories were priceless.  He was an amazing gateway to the history of Harris County's criminal justice system.

He would write in to the blog on occasion over the years and he very much had a sense of right and wrong about the goings on at the Office.  I can't say that I knew him as well as his friends from those old days, but I knew him as a man who the truth mattered greatly to.

Mostly, I knew George Flynn as a very kind and humble man.

My thoughts and prayers go out to George's family.
Posted by Murray Newman at 3:15 PM 3 comments:

After a several week hiatus, Reasonable Doubt returns to live TV at 8:00 p.m. tonight with a ton of topics to talk about.  We are still working on getting a guest lined up but there is no shortage of topics to discuss from the Kaufman County arrests, the Montgomery County attempted murder-for-hire, and a lot of stuff going on with Legislature and in the Supreme Court.

Tune in tonight with your questions.  I'll let you know when we get a guest.  As always, you catch us live streaming by clicking here.
Posted by Murray Newman at 6:52 AM 11 comments:

Dorian Cotlar for Bail Bond Board

In our world of the Criminal Justice System, we are constantly dealing with people running for things.  People run for Judge.  They run for District Attorney.  They run for HCCLA Board positions  (NOTE: that would be me).  We all have our reasons.

My friend, Dorian Cotlar, has put his name in the hat to run for a position on the Harris County Bond Surety Board.  The position he seeks is one that is to be filled by a criminal defense attorney who helps oversee the practices of the bonding companies that work in Harris County.  His intentions are unquestionably altruistic:

"My interest in this position began when I had a client’s mother pay a $540 NON-REFUNDABLE "premium” (fee) for a $500 bond.  For you non-criminal practitioners, the client’s mother could have simply gone to the Harris County Jail, posted $500 in cash, and then received a full refund (minus a small service charge) when her daughter’s criminal case was resolved.  A reputable bonding company would have charged a reasonable fee.  While this practice is technically legal, dishonest bonding companies mislead the most vulnerable people in our society in order to extract outrageous bonding fees." -- Dorian Cotlar

I've known Dorian since we worked together at the District Attorney's Office.  He has an impressively successful law practice.  His foray into working with the Bond Surety Board won't benefit  him -- it will benefit everyone else.  He is volunteering to take on an extreme amount of work to make our system better.  He wants to clean up the bonding practices in Harris County.

To vote for Dorian, please click on this link: https://hccla.org/wp-content/uploads/2013/04/BBB-ballot2013A.pdf

As you will see on the ballot, you must be eligible to practice in Texas and your primary area of practice must be in Harris County.  You also have to be legally eligible to represent criminal defendants.

Loosely translated:  My friends in the District Attorney's Office have to sit this one out.

However, that doesn't mean that prosecutors can't forward this link on to their non-prosecutorial friends in Harris County.  Civil attorneys, Family Law attorneys, and Corporate Law attorneys are all eligible to vote.

Dorian is the right guy for this job and he is running for all the right reasons.

He's one of the good guys and he's doing what he can to make a difference.

Please take time out of your day and vote for a good man who will make a major difference in the way things are done in Harris County.

A Day of Remembrance

Today and tomorrow, prosecutors around the State of Texas will be wearing a black ribbon to honor the memory of Kaufman County prosecutors Mike McLelland and Mark Hasse, as well as Cynthia McLelland.

Please take a moment to pay respect to the lives lost on this very sad day.
Posted by Murray Newman at 7:47 AM No comments: