As I was totaling up my end-of-month bills this afternoon, I couldn't help but notice that our esteemed city newspaper, the Houston Chronicle, had taken the liberty of billing me three separate times in the past thirty days.  Now, I'm not proud to admit that I subscribe to the Chronicle on most days, but in my defense, I only get the paper on Sundays.

For a "Sunday Only" subscription, I pay the sum of $14 a month -- in theory.  Assuming there are four Sundays in a month, that comes to $3.50 a paper.  That's not really all that great of a deal for something I can usually work through in the space of ten minutes on the average Sunday.  Not to mention, the newspaper lady routinely forgets to deliver the paper about once a month.

As with most of my bills, I have it on a credit card with autopay.

So, I called in to question my bill.  After being on hold for about fifteen minutes, I finally spoke to an actual living person!  The explanation went a little something like this.


Chronicle Lady:  Well, that bill on October 31st was supposed to be on October 15th, but we charged you late.  Don't worry, we did not charge you extra for the late fee.

Charge me extra for a late fee on something that auto-drafts?  Huh?


Chronicle Lady:  The bill on November 3rd is because we bill ten days before your subscription expires and it was going to expire on November 15th.


Chronicle Lady:  The bill on November 24 is because your subscription was going to expire on December 10th, so we billed you for it.

I'm completely confused at this point.

ME:  Wait, you charge me an extra five dollars because you put extra advertisements in it?

ME:  You know, nevermind.  Just cancel my subscription.

Chronicle Lady:  That will be another department.  Let me transfer you.

She then hung up on me.

And they wonder why the newspaper industry is dying.
Posted by Murray Newman at 5:00 PM 5 comments:

Email ThisBlogThis!Share to TwitterShare to FacebookShare to Pinterest
Labels: humor, The Houston Chronicle

This evening, I was contact by former District Attorney Chuck Rosenthal, who wanted to let me know that retired Assistant D.A. Ira Jones passed away over the weekend.

Ira was a senior narcotics prosecutor in Special Crimes when I started at the Office in 1999.  I can't say that I knew him very well, but he had a reputation as a no-nonsense, hard-nosed prosecutor.  In all honesty, I was kind of scared of him the first couple of years I worked there.

Somewhere around 2002 or so, I ran into Ira at Fogo de Chao and I stopped by his table to say hello.  He had never been there before and he was really enthusiastic about it.  Every time I would see him around the Office after that, he would always stop and talk about Fogo.  Apparently it was a life changing experience for him.  But I always enjoyed talking to him.  As it turned out, that scary, hard-nosed prosecutor was actually a pretty nice guy when you got to know him.

I can't say that I ever got to know Ira well, but every time I would see him, he would always come over and say hello.  It doesn't really seem like it was all that long ago when I last saw him.

But Ira was an icon at the Office.  He was a throwback to the old school prosecutors of eras gone by and everyone knew him as such.

I remember one time being in court and bantering back and forth with the late, great Rayford Carter, who wanted a deferred on a burglary of a building case.  I told Rayford if he could remember the names of five prosecutors, I would give him the deferred.  He immediately named Chuck Rosenthal, but then stalled out on naming another.

After thinking it over for a minute, he made winced and then slowly said: "Ira Jones," as if speaking of his prosecutorial nemesis physically pained him.  I told Ira that story once and he thought it was pretty funny.

Ira had a bout with cancer during his time at the Office, but I don't recall him missing much work.  He lost all of his hair, but it looked good on him.  We bonded over our hair cuts there for a bit, too.

Unfortunately, it looks like his cancer came back.  According to his friends' posting on Facebook, Ira passed away at MD Anderson over the weekend.  Although I wasn't close to him, I find myself very sad to hear the news.

He was a true character of the Harris County Criminal Justice System.
Posted by Murray Newman at 9:04 PM 3 comments: 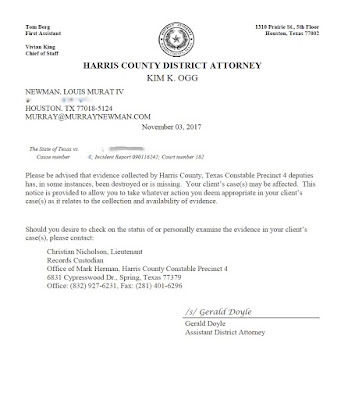 As it turns out, that was just the tip of the iceberg.
Posted by Murray Newman at 1:00 PM 8 comments:

I was very disappointed to learn last week that The Houston Press was ending its printed editions and laying off almost all of its staff.  I had not seen that coming, but apparently the business clientele that traditionally advertised with The Press was the hardest hit by Hurricane Harvey.  The loss of advertising revenue caused them to shut their doors.

Ever since I arrived in Houston for law school, I loved reading The Press.  It was a fun paper to read and the writing was great.  As a prosecutor, I often found myself disagreeing with some of the articles, but I had to appreciate the work that all of the writers did on their stories.  I also came to truly love The Press's open contempt for the Houston Chronicle.

Pound for pound, the writers for The Press always seemed to get the Criminal Justice System in Harris County, and writers like Meagan Flynn and Craig Malisow knew that the interesting issues couldn't be written up in a short article.  They took the time to go in depth and research the hell out of stories, and they never accepted any one point of view as the absolute truth.  Their big articles involved weeks, if not months of research before going to print.  They gave everyone the opportunity to throw in their two cents before going to print.

The weekly Houston Press was a tremendous asset to Harris County, especially to the Criminal Justice world.  It had the luxury of lengthy articles written by outstanding journalists.  Without picking on the Chronicle (at least not for the moment) or the television news stations, The Press was just so well suited to explain the stories behind the headlines and provide in depth analysis to what they meant.  Losing that forum is devastating to me.

To my friends that worked and wrote for The Press, I offer you a heartfelt "thank you" for all the times you looked into a story and/or heard me out when I was complaining about something that I hoped you would care about.  More often than not, you did care and your writing showed it.  You provided a greater public service than the public probably deserved.

It just won't be the same without you all.
Posted by Murray Newman at 8:17 PM 4 comments: