Showing posts from January, 2017
Show all

Good Additions to the Ogg Administration

By Murray Newman - January 24, 2017
The Ogg Administration has continued to make some positive additions in the personnel department over the past two weeks. On January 11th, Ogg announced that retired-178th District Court Judge David Mendoza was joining the Administration as the head of the newly created Office of Professional Integrity.  As regular readers of this blog know, I'm a big fan of Judge Mendoza.  Although he had previously been a judge, I had never met him before he won the 178th bench in 2008.  I quickly developed a strong respect for him after appearing before him in his court. Judge Mendoza is a quiet and thoughtful man who will be a tremendous asset to the Office in the days to come.  I'm glad to see that he'll remain a regular in the CJC as well. Today, the Office announced two other solid additions to the CJC team with the addition of veteran defense attorney (and actual veteran) Tom Berg . As noted in Ogg's e-mail to the staff, Tom is a defense attorney and former Federal Public
92 comments
Read more

HCCLA and the Former Prosecutor 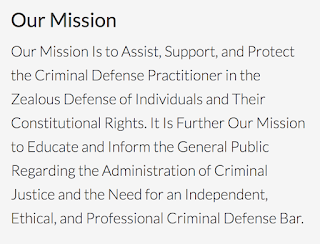 As I've always said (and truly believed), Harris County, Texas is home to some of the greatest criminal litigators in the Nation -- on both the prosecution and defense side of things.  Therefore, it stands to reason that Harris County would also be home to one of the best (and largest) criminal defense lawyers' association in the form of the aptly named Harris County Criminal Lawyers' Association (HCCLA for short). Historically, HCCLA has been a highly respected organization with a Who's Who of distinguished and prominent criminal defense attorneys, as well as Lloyd Oliver, on the list of past presidents.  They sponsor numerous CLE seminars that are free to members, have a Strike Force to help attorneys who find themselves on the wrong side of a contempt charge, and a Christmas Party that is the social event of the Criminal Justice Season. And then there is the Listserve. In theory, the Listserve is a message board for attorneys to assist each other with legal is
49 comments
Read more

By Murray Newman - January 09, 2017
In case you missed it, on Friday, the Houston Chronicle  ran an open letter from True Crime writer, Kathryn Casey , to Harris County District Attorney, Kim Ogg.  Casey, author of the book Shattered which profiled the Temple Case, reached out expressing her concerns with the D.A.'s Office refusal to recuse itself from the case. The article is worth a read for a couple of reasons.  First, it contains the entirety of Casey's letter, in which she logically rebuts the allusions that Team Temple has been making about having "proof" that the time frame involved with the case exonerates Temple.  Second, it clearly articulates why there is such a tremendous appearance of impropriety if Ogg doesn't recuse the Office. Casey, who attended the trial, has a much better grasp of the details of the case than I do and she also can't be accused of having any personal stake in the outcome.  She is writing based on logic. Unfortunately, it doesn't appear that Ogg is lis
23 comments
Read more

Episode One: The Phantom Kimness - A One Act Sci-Fi Play

The One Woman Review Team

By Murray Newman - January 06, 2017
Contrary to initial reports in yesterday's Houston Chronicle  that Kim Ogg would be presiding over a review team consisting of prosecutors Andrew Smith and Donna Cameron, as well as Temple Defense Team Surrogates, John Denholm and Steve Clappart, the paper is now reporting that District Attorney Ogg will be reviewing the Temple Case solely by herself. Interesting choice.  The reason cited by Ogg is that she needs to review it because of the controversial actions taken by then Assistant District Attorney, Kelly Siegler. Unfortunately for Ogg, that makes absolutely zero sense. The Court of Criminal Appeals has already reversed the case and sent it back for retrial after evaluating Siegler's actions on the case.  As I noted in my last post, she is no longer a factor in what happens on the case from here on. If there is sufficient evidence to proceed on the case, then it should proceed.  If there is not, then it shouldn't.  Plain and simple.  Unless Team Temple wants to
16 comments
Read more 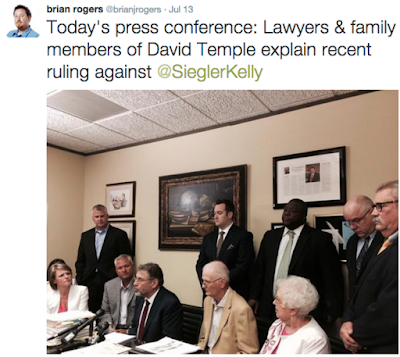 David Temple returns to court tomorrow morning (January 4th) in the 178th District Court to check on the status of charges against him for murdering his 8-month pregnant wife, Belinda, in 1999. The courtroom will doubtlessly be packed with media looking for their first glimpse of who will be handling the case on behalf of the Harris County District Attorney's Office under the brand new Kim Ogg Administration.  They will also be looking to see if the tone of tomorrow's setting gives any clue to what the Ogg Administration plans to do with the case. In the wake of the original Findings of Fact handed down by visiting Judge Larry Gist, Temple's attorneys, Casie Gotro and Stanley Schneider, immediately began lobbying then-District Attorney Devon Anderson to recuse the Harris County D.A.'s Office from handling the case.  Things have changed substantially since Gotro and Schneider made that request.  The incoming Ogg Administration elected not to renew the employment cont
38 comments
Read more
More posts