Showing posts from September, 2012
Show all

By Murray Newman - September 30, 2012
NOTE:  The following article is unavoidably long.  It addresses the allegations made by Dick DeGuerin and Stan Schneider in their defense of David Temple.  Most trial cases (especially murder cases) can't be fit into a sound byte or a short news article.  Some can't even be adequately addressed in a full-length documentary.  This article is for those who are interested in reading the facts behind David Temple's murder of Belinda Temple and they have a lot of detail to them. It has been a little less than three weeks since Dick DeGuerin and Stanley Schneider filed their "Out of Time Motion for New Trial or Alternative Application for Writ of Habeas Corpus Based on Actual Innocence, Newly Discovered Evidence and Willful Suppression of Exculpatory Evidence" on  the David Temple murder case .  During the past few weeks, the Harris County District Attorney's Office has elected not to participate in the investigation of the Temple matter, opting to employee Spec
70 comments
Read more

Red White and Blue with Mike Anderson and Lloyd Oliver

By Murray Newman - September 28, 2012
Okay, I'm back after a week's hiatus. Sorry for the confusion over last week's Reasonable Doubt , and I particularly apologize to our potential guest Gemayel Haynes.  We had a scheduling mix up that we didn't learn about until we arrived at the studio on Thursday night.  We look forward to having Gemayel on once our episodes resume after the break. If you need to get your local cable access on Harris County Politics, you should check out tonight's Red White and Blue hosted by Gary Polland and David Jones.  Judge Mike Anderson will once again face off with Leaping Lloyd Oliver on PBS tonight. The show is on tonight at 7:30 on Channel 8, but if you can't wait that long, it is already airing on-line by clicking here . I've started watching it and it is certainly quite animated.  Lloyd starts off by arguing with David Jones. It progresses from there. At one point Lloyd literally states "There are some people - I don't understand it -- but part
14 comments
Read more

By Murray Newman - September 19, 2012
Please join me and Todd Dupont for Thursday's Reasonable Doubt , where our guest will be our friend Gemayel Haynes .  Gemayel is a former-Assistant District Attorney with Harris County and a criminal defense attorney. There is no shortage of topics coming out of the Criminal Justice Center these days, so we have a lot to talk about.  Please call in with your questions. As always, you can watch us live streaming at 8:00 p..m. by clicking here .
3 comments
Read more

A Moment of Confusion

By Murray Newman - September 14, 2012
ATTORNEY:  I saw the District Attorney today. ME:  Which one?  Lykos or DeGuerin?
28 comments
Read more

If Pat Lykos Owned the Houston Texans: A One Act Play

By Murray Newman - September 13, 2012
SCENE -- the Interior of NFL Owner Patricia R. Lykos.  LYKOS sits behind a large desk, marveling over her hardwood floors.  The phone on her desk rings. SECRETARY:  Ms. Lykos, Coach Leitner is here to see you. LYKOS:  Send him in. DOOR OPENS.  ENTER COACH LEITNER LEITNER:  Greetings, Your Holiness. LYKOS:  Coach, great to see you.  Great job this weekend.  How are things? LEITNER:  Well, we got an interesting phone call this morning. LYKOS:  From who? LEITNER:  Coach DeGuerin from the Dolphins. LYKOS:  DeGuerin?  I LOVE that guy!  Everybody loves Coach DeGuerin. LEITNER:  Um, yes.  Well, everyone i n Miami loves Coach DeGuerin.  He's not really on our team. LYKOS:  You know under my administration that I don't like to consider opposing teams as if they are, you know... opposing . LEITNER:  Yes ma'am. LYKOS:  So what did Coach DeGuerin call about? LEITNER:  Well, he'd like to replay Sunday's game against us. LYKOS:  What?!  That's c
14 comments
Read more

By Murray Newman - September 13, 2012
Please join me and our host Todd Dupont for tonight's Reasonable Doubt this evening at 8:00 p.m.  It will be our last show for a few weeks as the station is broadcasting some political shows as the November election approaches.  Todd assures this "hiatus" had nothing to do with him threatening to walk off the set if he didn't get his own dressing room. Our special guest tonight will be attorney Lisa Andrews , who you may recognize from the news recently.  Lisa recently did an amazing job of exposing the Harris County Community Supervision and Corrections Department's faulty drug testing procedures.  We have a lot to talk about tonight and we hope you will call in. As always, you can catch it live streaming at 8:00 by clicking here .
Post a Comment
Read more

David Temple and the Dereliction of Duty

On the afternoon of January 11, 1999, David Temple took a shotgun, placed it to the back of his pregnant wife's head, and murdered her in cold blood. On November 15, 2007, after a long and winding road through the Criminal Justice System, a jury convicted Mr. Temple of the murder of Belinda Temple, and sentenced him to Life in prison and a $10,000 fine.  The jury had listened to six weeks of testimony in a battle between one of Harris County's best defense attorneys, Dick DeGuerin , and the District Attorney's best prosecutor, Kelly Siegler, before arriving at their verdict.  Despite the length of the testimony, their time of deliberation was only a few hours. At the end of July, I wrote this post , explaining how Harris County First Assistant District Attorney Jim Leitner was working with DeGuerin in an effort to clear the name of David Temple.  In that earlier post, I mentioned that Leitner had authorized unlimited overtime for a Harris County D.A. Investigator (Steve
44 comments
Read more 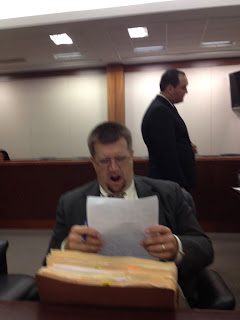 Part of being an effective defense attorney is judging the mood of the prosecutor that you are talking to when discussing your client's case. So, as a drill for the folks at home, please make your call on whether the reaction of the prosecutor below while reading my client's file is a) Outrage or b) Yawning. NOTE:  Thanks to Stephen Driver who (although he did not know I was taking this picture) had a good enough sense of humor to not threaten me with a lawsuit for publishing this photo.
4 comments
Read more

A Prayer for the Day

By Murray Newman - September 11, 2012
Every morning when I wake up, I read a few verses from the Bible. I don't know when exactly I started doing this, but I have done it for as long as I can remember.  I scan through the chapters for verses that I've underlined over the years -- verses that I've found meaningful or inspiring. I woke up this morning, thinking about September 11th, as I have on every September 11th since 2001.  There is little new that can be said by me about that horrible day. But I thumbed through the Bible on my bedside table that I got when I was confirmed in 6th Grade and I came to Romans 12:21. Do not be overcome by evil, but overcome evil with good. It seemed like a nice quote for a day like September 11th. I don't share this with you to open up a discussion on politics or policies.  In fact, I think we should have mandatory "no political discussions" on the anniversary of this day. I just shared that with you because it made me think that in the face of events
4 comments
Read more

More from the Lame Duck Administration

By Murray Newman - September 10, 2012
As of this morning, we are 112 days away from the End of the Pat Lykos Era at the Harris County District Attorney's Office.  Whether the new District Attorney will be former Judge Mike Anderson or former indictee Lloyd Oliver will be decided in November, but the fact that Patricia R. Lykos is now an official Lame Duck politician has long been decided. It is an interesting phenomenon when a politician becomes a Lame Duck.  Some use their short time remaining in Office to prepare for a clean and seamless transition.  Others try to rally their troops to execute one last piece of policy that will become their Legacy.  Some simply do nothing and just wait for the end to come, patiently drawing a paycheck. And then others seem to want to treat the office like a hotel room being occupied by Motley Crue and Quiet Riot on a bender. Ever since Pat Lykos lost the Republican Primary, she has been making regular trips to the Commissioners' Court, tinkering with the personnel roster, a
18 comments
Read more

A Day of Reckoning for Lloyd Oliver

By Murray Newman - September 05, 2012
Today we should learn whether or not Democratic Candidate for District Attorney (maybe) Lloyd Oliver's name will be appearing on the ballot in November.  As noted in the update to my last blog post, Federal Judge Lee Rosenthal remanded Lloyd's lawsuit back to State Court. A hearing is scheduled this morning at 8:00 a.m. in the 189th District Court -- Judge Bill Burke presiding.  The ruling on the hearing has been promised by this afternoon. I'm out of county this morning, but I'll try to keep you updated via Twitter if I hear any news.
15 comments
Read more
More posts