Showing posts from May, 2010
Show all

By Murray Newman - May 27, 2010
Tomorrow marks the last day on the job for 185 th District Court Chief, Kristin Guiney . Kristin, a 9 year veteran of the D.A.'s Office, is yet another tremendous loss for the County. Coming in as a pre -commit during the Summer of 2001, she established herself first as leader within her "starting class", and subsequently as a leader within the Office, as a whole. Managing her duties in the Trial Bureau, Kristin became known as a highly skilled prosecutor in front of juries. She combined the legal knowledge to do research on complex issues without constantly pestering the Appellate Division (something I was very guilty of during my time there), and also maintaining a down-to-Earth and very common-sense approach in trying her cases. She was not only respected by her peers, but also by the "higher ups" in the Office. Kristin was the kind of prosecutor that the Office needed. Not only did she do an outstanding job in the duties assigned to her as a prosecut
14 comments
Read more

By Murray Newman - May 20, 2010
Black Ink has written a very nice (and well-deserved) article comending former-First Assistant District Attorney Bert Graham for his years of service with the Office. If you haven't read it yet, you can check it out here .
18 comments
Read more 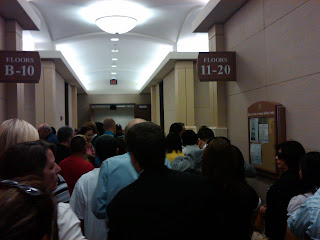 Co-written by Tyler Flood . Well, it doesn't look like the Fire Marshal's Office or anybody else in control of safety, order, or reason at the CJC is going to be doing anything to help the nightmarish situation that occurs at the elevator banks every weekday morning. Here's a view from last week at the bank: And here: I've been saying somebody would get hurt with all the crowding, and someone finally did. Attorney Mary Moore got one hell of a bruise on her arm by a defendant slamming his way into an elevator that was already filled to capacity. According to Mary, the defendant was unapologetic, but pointed out he couldn't be late for court. The Commissioner's Court and the Fire Marshals aren't doing too much investigating in the mornings because they are most likely terrified of what the results of that investigation would show: That the Harris County Criminal Justice Center is a poorly designed and poorly created multi-million dollar building
31 comments
Read more

By Murray Newman - May 13, 2010
Today, the Harris County D.A.'s Office posted some pretty significant moves that were only 3 weeks overdue. Some are really good. Some are interesting. Some are just downright confusing. On the whole, I'd give the moves a solid C+ from an administration that definitely needs a lift after Lykos ' disastrous appearance on Channel 11 and Clint Greenwood's Not Guilty verdict in the Bellaire Police Officer Shooting. The most intriguing of the moves is the creation of the "Capital Trial Division" which will be headed by Denise Bradley and Bill Hawkins. I'm not sure exactly what that means, but what I've heard from some of the prosecutors is that Bill and Denise will be serving as advisers to the Gang Who Couldn't Shoot Straight on Capital Murder cases. Lord knows that they could use some lessons.. After the Lykos ' decision on the Randy Sylvester case , I'm thinking lesson one should be entitled: Ass vs. Hole-in-the Ground -- Learning
19 comments
Read more

By Murray Newman - May 09, 2010
This upcoming week is shaping up to be a busy one for me, but I wanted to make sure that you all are aware of a Channel 11 Programming Note. Based on some teaser advertising, it looks like they are broadcasting an interview with everybody's favorite Public Defender , Pat Lykos , on Monday, May 10 th on the 10 o'clock news, where she apparently gets angry and storms out of the interview. Or, as I like to call it, she " pulls a Leitner ". Make sure not to miss it. UPDATE -- Okay, I just watched the news story. I'm not sure that the statistics of the increase in No Bills is all that alarming, but the murder case profiled does seem to be worthy of a little more looking into. But all of that takes a back seat to what an ass that Lykos made of herself. Wow. It was almost as if she knocked back a few Jack and Cokes before the interview. Was she trying to be cute by making Greenblatt state his name, or is that how she handles everybody who questions what she is
35 comments
Read more