Showing posts from February, 2011
Show all

By Murray Newman - February 27, 2011
One of the sagest pieces of advice that I ever received during the time that I was a prosecutor was from Judge Caprice Cosper, whom I consider to be the best Judge I ever had the honor to practice in front of. The case was a mildly high profile case where two working parents had left their five year old child in charge of their three year old child for an hour while their work shifts overlapped.  During the space of one tragic hour, the five year old daughter had played with a lighter and inadvertently set the family home on fire.  The five-year-old had escaped the flames. The three-year-old had not. I had been working the intake desk when the call came in.  As a new father, I was incensed, and (now, in retrospect) very reactionary.  I filed the case as a first degree Injury to a Child that had resulted in death against both parents.  A Grand Jury downgraded those charges to the State Jail Felony of Endangering a Child. Both parents pled guilty to a PSI (Pre-Sentence Investigat
18 comments
Read more

The 2012 Election Season So Far

The Lesser Known Dangers of Children on the Internet

By Murray Newman - February 23, 2011
When you are the parent of a child who is too young to be computer literate, often times the warnings about "beware of letting children on the internet" goes in one ear and out the other.  I mean, I knew there were people on-line that we all need to be worried about.  I just didn't know that those people might be the children themselves on occasion. Over the past weekend, my 5-year-old son and I went to the lake for a much needed vacation.  While there, we played some on the computer, including www.JibJab.com, which, much to my son's delight, gave us the ability to put use our pictures in videos that made us Star Wars characters.  He spent almost an hour watching a replay of himself blowing up the Death Star. Unfortunately, JibJab also offers a video that allows you to place yourself in a video with Justin Bieber. My boy played around with the Bieber video while I was making him dinner this evening, apparently. And then he clicked another icon he recognized on
6 comments
Read more

Bowling for Convictions (and other misguided morale makers) [UPDATED]

By Murray Newman - February 16, 2011
Mark Bennett's Defending People did a post last night on a recent memo from HCDA's Misdemeanor Chief John Jordan to the younger prosecutors in Misdemeanor offering them incentives for going to trial .  In it, Mark rightfully points out that morale over at the D.A.'s Office must be "in the basement" for John to be offering a "fratboy game" that encourages the less-senior ADAs to go to trial more often (and win) for such prizes as the opportunity to sit on big felony cases or get a Friday afternoon off for things like bowling.  Mark (also rightfully) points out that this type of incentive program seems to fly in the face of the seriousness of a person being charged with a crime. Do we really want a prosecutor in closing argument to be telling the jury:  "Ladies and Gentlemen, by convicting Mr. McCann for assaulting Mr. Fickman, not only will you be sending a message that violence is not acceptable in our community, you will also be assuring that I c
47 comments
Read more

Right to Know vs. Right to a Fair Trial

By Murray Newman - February 10, 2011
By now, I'm sure that most of you are well aware of the video of Houston Police Officers hitting and kicking 15-year-old burglary suspect, Chad Holley .  I saw it the morning that Channel 13's Wayne Dolcefino aired it and was saddened and dismayed to see what happened.  As anyone who reads this blog with any regularity would know, I hold police officers in very high esteem.  They aren't flawless, and part of my job is to locate and bring to light flaws in procedures and investigations that relate to my clients. It makes me sad for what a 15-year-old kid went through, and it makes me sad for the reputations of police in general that are tarnished by association with that video. However, the release of the video leaves me with mixed emotions regarding the controversy of whether or not it should have been released pre-trial .  As you know, I 'm completely against the idea of police officers and prosecutors and other public servants being crucified in the media when the
28 comments
Read more 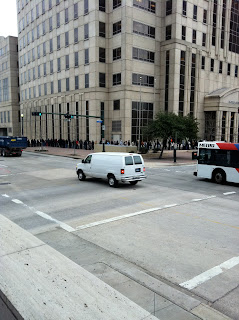 What's the only thing more fun than standing in a line wrapped around the building at the CJC? Doing it in below freezing temperatures. That just ain't right.
13 comments
Read more

By Murray Newman - February 02, 2011
There were some scary moments this morning for a female ADA when she pulled into the Harris County Parking Garage. An African-American male, approximately 5' 10" - 6' approached her before she got out of her vehicle, and he was carrying a black pistol.  The unknown person was wearing a blue coat, scarf, and was wearing slacks.  Fortunately, another Assistant D.A. was pulling into a parking space nearby, which apparently scared off the male.  All of this happened on the 10th floor of the garage. I know that the District Attorney's staff has been alerted to what happened and an office-wide e-mail has gone out warning folks to be careful about their surroundings. Obviously, the same warnings apply to everyone who parks in that garage.  If you have any information that could be helpful, contact a District Attorney's investigator.
4 comments
Read more
More posts