Showing posts from November, 2010
Show all 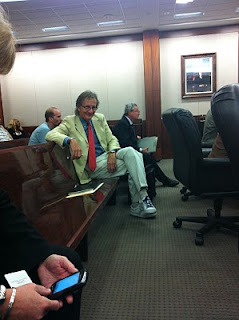 Despite last year's public service announcement regarding Courtroom Dress Code Violations during the holidays, it appears the message was lost on some of our more elderly attorneys. This year's violation is ten times worse than last year. Somebody please alert the fashion police and have them arrest this man on sight.
20 comments
Read more

By Murray Newman - November 19, 2010
Today marks the last day of Felony Two Andrew Leuchtmann, the Two in the 263rd District Court. Andrew is headed for greener pastures over at the Feds, like several other Assistant D.A.'s have done over the past few months (including a certain sock-tie wearing Chief who shall remain nameless). Andrew started at the Office several years after I did, and I never had the occasion to work with him when I was a prosecutor. He did have an excellent reputation as a smart, hard-working prosecutor who was good in trial. Shortly after I left the Office, he was moved to the Special Crimes Division where he worked under John Brewer in the Major Fraud/Identity Theft Division. Like Craig Still before him, Andrew took to the new job division like a fish to water. He was highly respected amongst the Defense Bar as a prosecutor who was knew his cases and what he was talking about, and was willing to work with whatever information an attorney provided him with. I got to deal with Andrew on a c
5 comments
Read more

By Murray Newman - November 17, 2010
In what is clearly the "harshest" treatment of Pat Lykos by the Houston Chronicle , Brian Rogers wrote a n article about the "two sides" of Pat Lykos . Brian has been working on the story for some time now, and I'm glad to see that the fan club over at the Chron allowed it to actually be published. All in all, it is a pretty fair piece to Lykos , due in most part because they let her rebut (and by that I mean "spin") those negative things said about her. I'm keenly aware that most fans of Lykos label me and the commenters who blast her as "malcontents" who are suffering from "sour grapes" and who are so bitter over our "reign of terror during the Rosenthal Administration" ending that we can't see that Pat is the second-coming. That's fine. But those who would argue that my motives in blasting the current Administration are somehow tainted never seem to actually rebut the facts and the message that I&#
14 comments
Read more 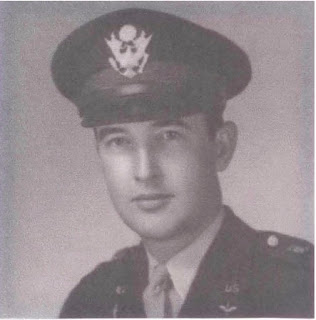 With Veteran's Day tomorrow, and the Marine Corps Birthday today, I wanted to post something about the Veterans in my family that I am very proud of. My father, Louis Newman, was a Marine Corps Officer who served three tours of duty in Vietnam between the years of 1967-1969. During that time, he earned the Silver Star, two Bronze Stars, and two Purple Hearts, amongst other medals. He is, without a doubt, the toughest man I know, and I don't think I tell him enough how proud I am to be his son. His father before him (also named Louis Newman) was an Officer in the Army Air Corps and a pilot of B-29s (just like the Enola Gay ) and he was based off the island of Tinian in the Pacific Arena of World War II in 1945. He flew bombing raids over Japan, and even piloted his plane over the USS Missouri during the official surrender ceremony of Japan to the United States. My dad was one year old when his father went to Japan to fight. On the day of his first birthday, my grandfat
6 comments
Read more

By Murray Newman - November 09, 2010
Local news stations are reporting that Alexander Bunin has been selected by Harris County to be the new head of the Public Defenders Office. I am not familiar with Mr. Bunin, but those folks that I've heard from who do know him are giving very glowing reports about him as a defense attorney and administrator. He's got a big task ahead of him. The PD's office is going to have to find a place to house itself, and then find the staffing necessary to manage the caseload it is tasked with. It will be interesting to see where Mr. Bunin will recruit those new Assistant Public Defenders from. As an anonymous, large, Irish defense attorney friend of mine suggested, perhaps the pool will come from departing Assistant District Attorneys, but I kind of doubt it. Most prosecutors that leave the D.A.'s Office generally leave for the freedom of being their own bosses and the opportunity to make more money. A transfer over to another government entity would seem to negate tho
10 comments
Read more

By Murray Newman - November 03, 2010
I know that this blog tries to focus mainly on what is going on in Harris County, but I am so very excited about my friend, Jack Roady, winning the Galveston County District Attorney position. Jack started at Harris County about the same time I did, and I can honestly say he is one of the nicest guys you will ever meet. He has spent the majority of his time in the appellate/writs section of the Office, so Galveston citizens can expect not just a very kind elected D.A., but also a brilliant one. For the prosecutors in Galveston who don't know Jack, you don't need to be scared of him. He is going to be a fantastic boss to work for. For the defense attorneys who practice in Galveston, you'll be happy to have him there. He'll listen to everyone's input and carefully consider all sides of the story. I don't have anything bad to say about the current sitting D.A., because I don't know him. But I do know that you can't go wrong with a prosecutor like Ja
20 comments
Read more

By Murray Newman - November 02, 2010
Well, it doesn't look like the 2010 Election is going to be much of a nail-biter. All the Republicans on the criminal bench are easily winning as of this writing. Quite frankly, the only reason I'm even writing this post is to hear your feedback on the elections, because this certainly isn't that shocking news. I'm terribly disappointed that Loren Jackson seems to be headed for defeat. He truly brings something special to the office of the District Clerk, and I feel pretty confident in saying that he brought about more positive changes during his short tenure than Chris Daniels will over the next four years. Once again, straight-ticket voting has proven itself to be an evil, evil thing. However, one thing that does seem to have died during this election is apathy. As sad as I am about Loren, I'm glad to see voter involvement making such a dramatic comeback after 2008. Hopefully, we'll see this kind of involvement again in 2012. Especially during the Re
12 comments
Read more

By Murray Newman - November 02, 2010
. . . signifying nothing. Word is that a jury has just sentenced Susan Wright to 20 years on her punishment retrial for stabbing her husband, Jeff Wright 193 times. The reality is that the change in her sentence is minimal in the big scheme of things. She received 25 years the first time, and after monumental legal wrangling, she got just a five year discount. She'll be eligible (not entitled) to parole two and a half years early. I know that prosecutors Connie Spence and John Jordan did an excellent and thorough job. I know that defense attorneys Jon Munier and Tommy LaFon also did an excellent and thorough job. But the bottom line is that this case involved trashing the reputations of Neal Davis and Todd Ward, when they didn't deserve it. They did a thorough and good job the first time around. They made judgment calls during the first trial that, quite frankly, I agreed with from a defense standpoint. Jeff's family, who are some of the sweetest people I'v
27 comments
Read more
More posts