Showing posts from August, 2013
Show all

By Murray Newman - August 31, 2013
As most of you in our courthouse community have probably heard by now, Harris County District Attorney Mike Anderson passed away overnight after a battle with cancer.  As someone who practiced in front of him, campaigned for him, admired him, and considered him a friend, I don't think I can adequately express how heartbroken I feel. I know there are so many other attorneys and friends of Mike who knew him much longer and much better than I did, but I looked up to the man ever since I met him.  When you're a young baby prosecutor, it is very easy to be intimidated by judges, but Mike was always the friendly judge.  He conveyed to you that he was glad you were as interested in criminal law as he was, and his enthusiasm was contagious.   Mike's enthusiasm was contagious because he was a born leader.   I know that I have told the story here before about the first time I ever really had a conversation with Mike, but I'll tell it again.  We were attending the fune
21 comments
Read more 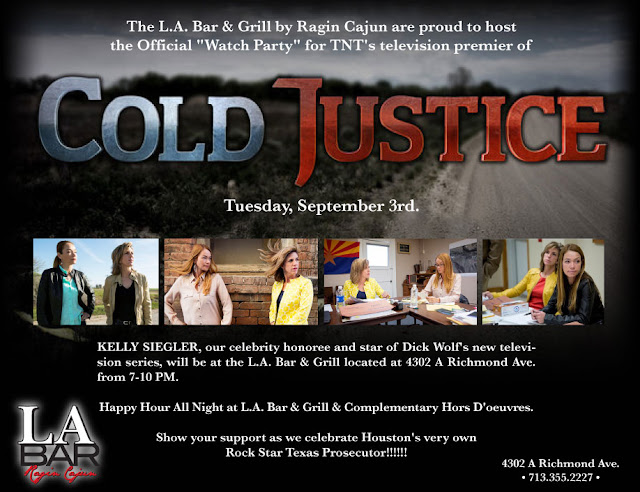 Everyone is invited to the Ragin Cajun/LA Bar (4302A Richmond Avenue) on Tuesday, September 3rd for the official Houston watch party for  Cold Justice . The show doesn't begin until 9:00 p.m., but the party starts at 7:00 p.m.  Kelly Siegler will be there and there will drink specials and appetizers. If you can't make it to the party, please don't forget to watch the show on TNT!   Tell your friends and family, too! Hope to see you Tuesday.
9 comments
Read more

By Murray Newman - August 13, 2013
On Thursday, August 15th from 5:30 p.m. to 8:00 p.m., there will be a fundraiser held to raise money for Harris County STAR Drug Court. The event will be at the Parador, 2021 Binz, Houston, Texas 77004 and will feature the entertainment from the Writ Kickers  and admission is $30 a piece. I will admit that when STAR Court was first created, I was very skeptical about how effective it would be.  Over the past years, I've been absolutely amazed by what a positive, life-changing program it has been for so many people that I would have never thought had the ability to succeed. The STAR Court works and programs like it deserve our full support. For more information, please click here .
Post a Comment
Read more

By Murray Newman - August 07, 2013
As most of you know, the premiere of Cold Justice  starring Kelly Siegler and Yolanda McClary premieres on September 3rd at 9:00 p.m. on TNT.  TNT released this extended preview today, showing snippets from the first three cases we worked on.
30 comments
Read more

A Simple Solution on Bond Forfeitures

By Murray Newman - August 02, 2013
As we have addressed time and time again on the blog, the Harris County Criminal Justice Center -- as a building -- is horrible.  It is the classic definition of poor design and architecture.  Whichever brain child came up with it never comprehended the mass of humanity that would be trying to cram into twelve elevators every morning.  From the floor layout and selection (i.e., having the courts on the top floors and all the other offices below them) to the lack of stair or escalator access to the lower floors, there is pretty much nothing right about that place. Throngs of people are routinely lined up around the building, futilely hoping that they are going to make it inside, past security, and up the elevators in time for their 9:00 a.m. docket call. Obviously, a large chunk of them fail to get there on time. Many (if not most) courts call docket at 9:00 a.m., and if a Defendant's name is called with no answer, a prosecutor will dutifully call out: "State moves for bo
14 comments
Read more
More posts