Showing posts from June, 2012
Show all

By Murray Newman - June 28, 2012
Sorry for the late notice on this, but there were some issues ironing out the details for the show tonight.  Todd is out of town with his daughters, so I'm taking over hosting duties for the evening. My guest will be Franklin Bynum.  Yeah, I know you are probably disappointed, but he's really insistent.  It is just going to be the two of us on the show, because we figured a third person might cut into us hogging the conversation. Please call in with your questions and comments.  I will be the one wearing shoes. As always, you can watch it live streaming by clicking here .
Post a Comment
Read more 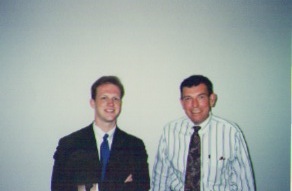 This evening I learned that an old friend and mentor, Ed Ziegler, passed away after a long battle with cancer.  He wasn't someone from Harris County and I don't know if many of my readers would have known him, but he was one of the first people I ever worked for in the criminal law arena.  He was one of the most unusual, outspoken, and admirable people that I ever have had the honor of knowing. Back in February of 1994, I was the ripe old age of twenty-one and a student at Texas A & M.  I started an academic internship with the Brazos County District Attorney's Office, working for Bill Turner.  Bill put me under the supervision of his investigator, Gil Schultz, and Gil put me to work for the intake prosecutor, Ed Ziegler. I cannot begin to express how much those three men would ultimately influence almost every aspect of who I am today. When I first met Ed Ziegler, I was scared to death of him.  He was in his mid-50s and had recently retired from the Army, where (
3 comments
Read more

Wouldn't It Be Nice?

By Murray Newman - June 25, 2012
Although Pat Lykos never actually made herself very familiar with an actual court room  during her tenure as District Attorney, she does seem to be making herself quite comfortable by appearing in front of the Commissioners' Court these days. Two weeks ago, there was an appearance before the Commissioners' Court that had something to do with the salary levels of some support staff within the Office.  There are some reports that at tomorrow's meeting, she may be making a similar appearance in regards to tinkering with prosecutorial salaries.  There is some confusion and controversy about what those appearances are designed to accomplish, so I'm not posting about them quite yet. What is  very clear on tomorrow's Commissioners' Court agenda is item 14(d), which is a request for money that reads: $17,108 to reimburse Stephen Scott Morris for legal expenses incurred in connection with an investigation and court proceedings in the 185th District Court. Morris,
39 comments
Read more

By Murray Newman - June 19, 2012
Well, things are pretty quiet at the old CJC these days, as Lykos and the Gang seem to have gone underground for the time being.  I'm still looking into what happened with her at the Commissioners' Court last Tuesday, but I'll have to get back to you on that one. In the meantime, I did do a post on the Chronicle blog this morning, which was inspired by an insanely early morning phone call today.  You can check it out by clicking here.
14 comments
Read more

By Murray Newman - June 14, 2012
Join me and Todd Dupont for tonight's Reasonable Doubt where our guest will be J. Julio "JV" Vela .  JV and Todd have been enjoying a very successful week at the CJC and we are looking forward to talking about it on tonight's show.  I imagine that we will be talking about closing arguments, so if you've got some favorites to tell us about, please call in. We'll be on tonight, live at 8:00 p.m.  As always, you can watch it live-streaming (allegedly) by clicking here .
6 comments
Read more

The Latest from the Lame Duck Administration

By Murray Newman - June 12, 2012
Well, it looks like things have settled down somewhat over on the 6th Floor in the aftermath of the Republican Primary.   Despite initial concerns of mass retaliatory firings by the Administration, Lykos seemed to have been content to just loudly blame all of her underlings for losing the election. I was surprised to learn that Lana Shadwick made her return to the Office yesterday after her leave of absence to run for Judge.  Her position in Grand Jury had (mercifully) been filled by someone who actually knew what she was doing.  Hopefully, this will cut down on Shadwick getting defendants indicted who were already on deferred adjudication and help the County avoid a lawsuit for unlawful arrest. Lana being replaced in her Grand Jury slot, however, begs the question of "Where do we put her now?" Apparently she is officing on the 6th Floor with an ambiguous job description. Lykos is appearing in front of the Commissioners' Court today for some ambiguous reason.  I&#
21 comments
Read more 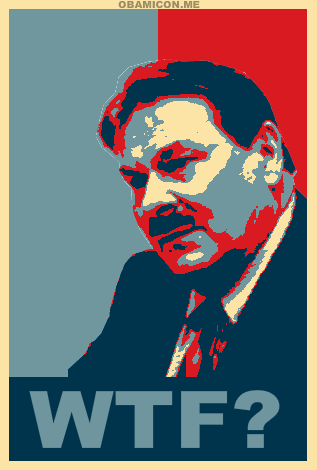 Where Do We Go Now?

A commenter on my last post cited the final moments (after the credits) in the classic  Ferris Bueller's Day Off : Remember that very, very last scene in Ferris Bueller's Day Off?  "Hey, what are you still doing here?  The movie is over . . . go home . . .  go."  Well, in the same vein and tone of speech:  "Hey, you/we . . . Won.  Why are we still talking about this woman?  Let's get to work and she WILL be gone in a few short months -- compared to the last 3+ years.  So go on . . .  now."  Wanna drive a narcissistic queen crazy?  Ignore her.  Be indifferent . . . let's let all of this kvetching die on the gossip line.   I couldn't agree with the commenter more. Although thinking of Pat Lykos as Ed Rooney, Rachel Palmer as Jeanie, and of course, Alex Bunin as Ben Stein has inspired me to post this clip. The Republican Primary of 2012 is over and regardless of what happens in November, Pat Lykos is done as of December 31st (at th
32 comments
Read more

In the Name of the Brand

By Murray Newman - June 01, 2012
On Tuesday night, when it became apparent that Lykos was getting completely crushed in the Republican Primary by Judge Mike Anderson, she gave an extremely ominous statement regarding her employees who had supported her opponent. "There's an old Texas saying that you 'ride for the brand,' and if they can't ride for the brand, then they need to leave." Today Pat Lykos lived up to that threat by firing long-time investigator Kenny Rodgers. Kenny had served as the Chief Investigator under the Johnny Holmes Administration before leaving the Office under Chuck Rosenthal.  He's been in law enforcement for 40 years. In December, approximately 30 minutes after Judge Mike Anderson announced that he would be running for District Attorney, Lykos approached Kenny and asked him to "drive her around" and "introduce her to people" in hopes of him using his contacts in Harris County to get her re-elected.  He politely declined, explaining that h
44 comments
Read more 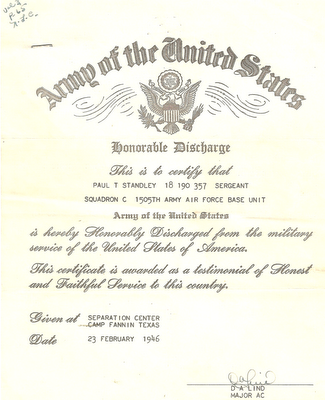 Today there will be a ceremony at Ellington Field to honor World War II Army Air Corps Radio Operator, Sergeant Paul T. Standley.  The 147th will be marking Sergeant Standley's 70th anniversary of joining the Army Air Corps.  He began his career at Ellington Field, but would see a lot of island hopping during World War II as he transported soldiers from Hawaii, to Guam, Kawajalin, Siapan, and after August 1945, home. As part of the ceremony honoring Sgt. Standley, his son, Judge Larry Standley has created a shadowbox display containing his father's uniform and medals. As Judge Standley pointed out, there are only approximately 1.7 million American veterans still alive from World War II, and statistics seem to indicate that about one thousand of them die every day.  This is an amazing and touching tribute from a Son to a Father -- and a Nation to a Solider. Congratulations, Sergeant Standley and thank you for everything.
4 comments
Read more
More posts