Showing posts from June, 2010
Show all

By Murray Newman - June 25, 2010
Today marks the final day of HCDA Office favorite and former child actor Will " Wombelina " Womble. When I left the Office in December of 2008, my two was a prosecutor who has asked not to be named on my blog, so I will use the pseudonym "Justin Keeter ", and my three was Womble. I had not known Womble prior to him coming to work in the Fighting 339 th , and knew nothing more about him other than he used to be Ricky Schroeder's stunt-double on Silver Spoons . I quickly researched Womble's background by checking http://www.imdb.com/ , and found that he actually had a distinguished film career, playing the role of "Corpse" in several prominent television series such as "J.A.G.", "Judging Amy", and "Designing Women". (Yeah, Will, I know that's an old joke, but I never get tired of it.) He also had a brief part as "Scared Nurse" in Michael Bay's "Pearl Harbor". It was during his illustrious
10 comments
Read more

Mac vs. PC for the Trial Attorney

By Murray Newman - June 19, 2010
Okay guys, I'm looking for advice from y'all. Ever since law school, I've been a PC guy, and I'm familiar and comfortable with all that Microsoft has to offer in the way of programs like PowerPoint and such. But those Macs sure do look purty , and I've been thinking of making the switch (which will cost a pretty good chunk of change). I'm hearing they've got better programs for jury trial presentation. So, if any of y'all have some input on this, please let me know. And yes, I know this is a weak article, but I'm in trial, so give me a break!
24 comments
Read more

By Murray Newman - June 11, 2010
Things are getting kind of crazy over at the Harris County District Attorney's Office. Last week, Misdemeanor Chief Angela Smith went to turn in her two weeks notice to the Office and was met with a surprising reaction from the Gang Who Couldn't Shoot Straight: they begged her to not quit. Obviously, this is a stark contrast to the Administration's dealings with Trial Bureau prosecutors, which heretofore was pretty much a firm policy of "Screw them." However, with the budget constraints and the county-wide hiring freeze in place, I think that Lykos and Crew may suddenly be realizing that they are headed toward a personnel crisis of epic proportions. And Angela Smith is a damn good prosecutor. I dealt with her on a few occasions when she was in the 262nd, and her level of preparation, knowledge of the law, professionalism and courtesy was excellent. I certainly don't fault Lykos for giving her a hard sell on begging her to stay. But the lengths that t
31 comments
Read more 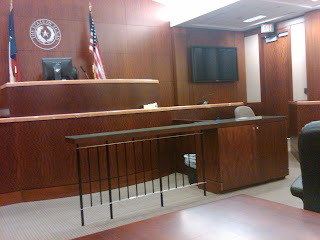 While handling a case on the 20th floor's State Jail Court last week, I happened to duck into the Ceremonial Courtroom for a minute. When I walked in, several of the County's technology gurus were doing some experimenting with some audio/visual equipment that they told me they ultimately hoped to have in place all of the courtrooms of the CJC in the not-too distant future. Considering the fact that technology (especially big screen TVs) is like crystal meth to me, I was really excited by this news. The idea being to place three 50 inch flat screens in each courtroom that can be easily viewed by the prosecutors, the defense, and (most importantly) the jury. There will be one where the current televisions are. This one will be easily viewable by the jury and by the prosecution. As a side note, the current "big screen" televisions they have really remind me of the ones they had at Mr. Gatti's when I was growing up in Bryan. One will be over the shoulders of the
23 comments
Read more
More posts