Showing posts from August, 2017
Show all

Shades of Disasters Past 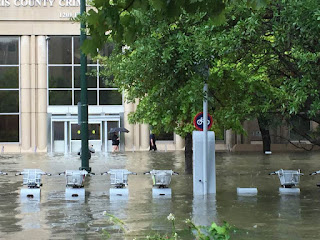 If you are reading this, I'm hoping that means that you rode out Hurricane Harvey okay.  I've lived in Houston since 1996 and I'm speechless at the sadness, devastation, heroism, and sense of community that I've seen unfolding over the past several days.  This city and county never cease to amaze me. My family and I made it through (thus far) with no flooding and minimal damage.  I hope the same is true for you and your families.  My heart and prayers go out to those who have lost so much. Having gone through both Tropical Storm Allison and Hurricane Ike during my years as a prosecutor, I've been seeing very similar reports coming out of the CJC over the past several days.  As many of you may remember, during Allison, the brand new CJC proved to be absolutely useless during a flood.  Water filled the basement and elevator shafts, rendering the building unusable for almost a year.   Some modifications were made, and the building did substantially better during
8 comments
Read more 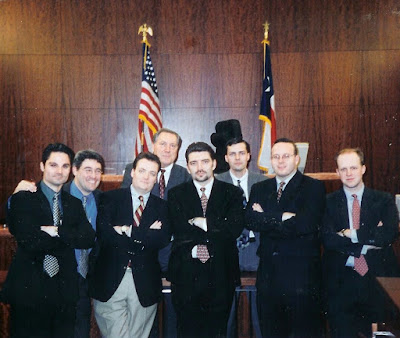 L-R:  John Jordan, Peter DeLeef, Adam Brown, Earl Musick, Brad Hart,  Bill Exley, Robert Summerlin, & Me It's hard to fathom that 18 years ago today I first entered the Harris County Criminal Justice arena.  I remember it like it was yesterday. I was 26 years old.  Engaged to a girl named Lisa who, two months later, would become the first in a series of wives. Although I had attended law school in Houston, I had moved back to Bryan/College Station after taking the February Bar Exam because I didn't have a job lined up.  I worked as a paid intern (for $6 an hour!) at the Brazos CountyAttorney's Office while I waited on the Bar results.  When I passed, I got invited to apply with Harris County, and I moved back to Houston the week before I started. Chance Bolton, a childhood friend of mine, had recently gotten out of the Navy and was going to school in Houston.  He and Lisa and I moved into an old house I was renting in Timbergrove.  None of us had any money
3 comments
Read more 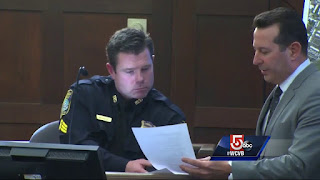 The headline coming out of The Coastal Bend Chronicle sounded pretty damning. Assistant County Attorney Makes Implied Threat on Secret Video Recorded by Officer. It's a story out of Aransas County, but the headline got my attention when I saw that a defense attorney out of Dallas had shared it on her Facebook page.  It further garnered my attention when I saw that my friend (and fellow defense attorney and native Bryan-ite) Eddie Cortes was commenting on the article in defense of the prosecutor.  Eddie is a die-hard defense attorney, and doesn't throw around support for The Government lightly. I then read the article and realized that the prosecutor in question is former Harris County Assistant District Attorney Kelsey Downing.  I knew Kelsey when she was a prosecutor here.  We are friends on Facebook, but we never socialized together.  I dealt with her in court on a case or two and always found her to be above-board and professional.  The article made several accusat
12 comments
Read more

The Name is Coyne. Brian Coyne. 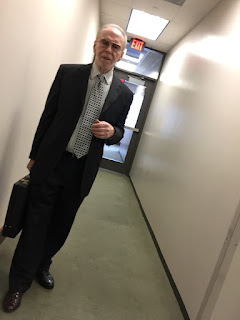 My friend and fellow defense attorney Brian Coyne is a smooth operator. In addition to being one of the best trial lawyers I've seen try a case in the CJC, he's also a very sharp dresser . His suits are custom tailored from Jos. A. Banks.  His sunglasses are the most expensive that the Sunglass Hut kiosk at Willowbrook Mall has to offer.  His shoes are ordered exclusively from Foot Locker's business attire section.  His briefcase was the most expensive item for sale in Washington D.C.'s Spy Museum gift shop. Other than losing his umbrella from time to time , Brian pretty much has his stuff together. Except today. Today was a bad fashion day for Brian.
8 comments
Read more

By Murray Newman - August 05, 2017
One of the issues that I have not written about on the blog over the past several months is the epic battle being waged in the Federal Courts over the Harris County Bail Bond System.  It isn't because I don't find the issue important.  It is tremendously important and will have far-reaching consequences for the way all cases are handled in Harris County. I didn't write about it because I didn't have a firm grasp on all of the details involved.  The information that I had on the issue, I largely learned from reading Meagan Flynn's articles in the Houston Press  about the lawsuit .  I also heard concerns from some judges and prosecutors about what would happen after U.S. Chief District Judge Lee Rosenthal declared Harris County's bail bond system to be unconstitutional. The primary criticism against Judge Rosenthal's ruling was that it basically handed unsecured bonds to people who were not likely to come back to court.  Since the ruling dealt with misdeme
15 comments
Read more 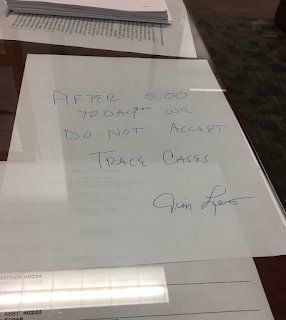 The Harris County District Attorney's Office under Kim Ogg has finally rolled out the "No Trace Case" policy that many of us have been expecting since she took office on January 1st of this year. The policy dictates that the Office will no longer file State Jail Felony Possession of a Controlled Substance charges on cases where only residue or "trace" amounts of the drug are recovered when a person is arrested.  These types of cases are most commonly filed when a person is arrested still carrying a crack pipe, but the crack has long since been smoked.  Under the law, felony charges may be brought if there is a detectable (as opposed to usable ) amount of drugs such as heroin, cocaine, or meth recovered.  As a matter of contrast, for a person to be charged with the misdemeanor charge of Possession of Marijuana, there must be a  usable  amount recovered.  There is no such requirement for the "harder" drugs that fall in the felony level, and it is not
14 comments
Read more

For the Lazy, Yet Ambitious Prosecutor 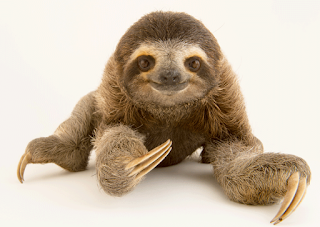 As most of you know, the Harris County District Attorney's Office is staffed 24/7 with prosecutors working as intake attorneys.  When a police officer makes an arrest for anything higher than a Class C misdemeanor, he or she has to call a prosecutor and get approval to file that charge.  I wrote about how it worked back in 2008 , when this blog was young and I was still a prosecutor.  As far as I know, it hasn't really changed all that much. One component that I didn't cover back in 2008 was that of the Probable Cause "P.C." prosecutor.  The prosecutor working this position was tasked with collecting a group of newly filed cases and then taking them to Probable Cause Court.  At Probable Cause Court, recently arrested defendants are brought before a magistrate, and the Probable Cause prosecutor would read a short summary of why they had been arrested.  The magistrate would then make a finding of whether or not Probable Cause existed to continue to hold them.
23 comments
Read more
More posts