Showing posts from December, 2010
Show all

By Murray Newman - December 31, 2010
I love being a member of the Defense Bar. And I remain eternally appreciative of the help that I have received from other members of the Harris County Defense Bar over the past two years as I began a defense practice. I've been honored to work alongside some of the best in the criminal defense business. And I've been a very enthusiastic and dedicated advocate to those clients who have entrusted me with their cases. Contrary to the belief of some, this wasn't all that big of a transition from my job as a prosecutor, which I held for a little over 9 years. I never relished in the misery of a defendant that I was prosecuting.  I was always keenly aware of the repercussions prosecuting somebody had on collateral matters such as a defendant's family, his job, etc.  I've written here before about one of the most memorably heart-breaking moments of my career was when a small child came waddling up to me moments after his father had been sentenced to life in priso
59 comments
Read more

By Murray Newman - December 30, 2010
JANUARY January 4 – Upset that her goddaughter, Rachel Palmer, didn’t get the free walk to a judgeship that she wanted for Christmas, Pat Lykos asks Palmer’s opposing candidate, ADA Don Smyth, to switch races.  He declines. Moments later, Smyth is approached by Jim Leitner and asked when he is planning on retiring from the Office. January 12 – A massive earthquake strikes the island-nation of Haiti, ultimately causing the death of approximately 250,000 Haitians.  Arch-conservative Pat Robertson and Republican sleaze bag activist Terry Lowery argue that this is punishment from God.  Lykos takes the high road, announcing there was no earthquake, but that 250,000 deaths was the “normal rate of attrition” for Haitians. January 15 – Longtime legendary Administrative Assistant Barbara Eaglin retires after decades of harassing baby prosecutors that have come through the Office.  Lykos and the Gang celebrate.  Their initial plans to fire all popular members from previous administrations ha
17 comments
Read more

Merry Christmas Eve to All

By Murray Newman - December 24, 2010
Happy Holidays and Merry Christmas Eve to everybody down at the CJC. As per tradition, I have begun the morning by the Ceremonial Firing of Myself. I know it is a late start, but if anyone wants to do the 12 Days of Lykos for 2010, feel free. You can seek inspiration from past lists here and here . Or, you could just enjoy the day with friends and family, which is what I'm planning on doing. Whatever you choose to do, I hope you all have a safe and happy holiday season. Merry Christmas, Murray
18 comments
Read more

By Murray Newman - December 17, 2010
Unfortunately for the citizens of Harris County, the departures at the District Attorney's Office are now coming in so rapidly that I can't even keep up on the official "obituaries" that I've been doing for the Assistant District Attorneys who are leaving. The past couple of weeks have seen the departure of Environmental Law prosecutor Will Graham, Felony Prosecutor Samantha Cox, and Misdemeanor prosecutor David Zeitzoff . There may be more I'm not aware of. This week has seen prosecutors Colin "Judo" McLaughlin and Daphne "Jazz Hands" Newaz turning in their resignations. Judo and Jazz Hands are headed to be prosecutors in other regions -- Tarrant County and the U.S. Attorney's Office in El Paso , respectively. Felony Two Abraham Hamilton is also having his last day today as part of the "normal rate of attrition". All of these guys were/are great prosecutors. Also leaving along with Daphne, will be her husband, Rifi
12 comments
Read more

By Murray Newman - December 14, 2010
Today, the District Attorney's Office issued the memo on moves across the board for their personnel. It is an interesting read. Quite frankly, I don't know that I've ever seen as massive of a shift in positions since I've been in Harris County. Some of the moves are great calls. Some are reflective of the budget crunch. Some are just downright bizarre. Here's my take. 1. The promotion of Wes Rucker and Jon Stephenson to Felony Chief was an absolutely outstanding move. These two guys represent everything that is right about being a prosecutor. They are honest, straightforward, and fair. They need more prosecutors in leadership positions like them. 2. The promotions of Amy McCauley , Lauren Bard, Amanda Skillern , and yeah, even Scott Pope to Felony Two are also solid decisions. All four (even Pope) are hard working and dedicated prosecutors who will be good down the road. I'm glad the Office finally recognized that. And here's where things ge
12 comments
Read more

Holiday Cheer- Every Half Hour on the Half Hour!

By Murray Newman - December 13, 2010
Back in the Olden Days, when the Harris County District Attorney's Office used to resemble an actual pleasant place to work, we used to have these things called Christmas Parties. No tax payer money was spent. Funds were collected from the prosecutors, secretaries, and investigators, etc. And the parties were fun. It was a great time unwinding with the people you worked with and getting to meet their families. This has now, apparently, been replaced by the Lykos version known as "Holiday Cheer". Well, I'll agree that it is a holiday, but "cheer" might be something in shorter supply than prosecutors around that office lately. The funniest thing to me is that the "invitation" to Holiday Cheer has been regimented down to half hour increments that each floor has gotten where they will be allowed the honor of hanging out with the Gang Who Couldn’t Shoot Straight Executive Leadership Team. The 1st & 6th floor get to celebrate from 2:00-2:30
10 comments
Read more 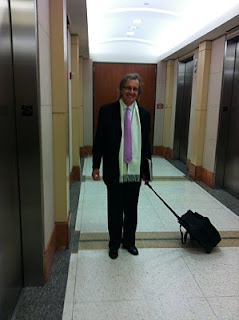 You know, I have never over-estimated the influence of this blog. I write to inform. I write to amuse. I write to hopefully make some positive changes every once in a while. Those positive changes are often few and far between, but when you do write something that was so influential that it changed someone's life, you never forget that moment. Today is one of those days. Clearly after writing this post last month, I helped change the life of one of our elder generation of lawyers. Today, my heart was warmed to see this positive change: It does my heart good to see that, working together, we can make the CJC a better place. You're welcome, Pete. And from all the pimps who now have clothes for the winter, thank you for your donation.
1 comment
Read more

By Murray Newman - December 07, 2010
The media (especially the Houston Chronicle ) has been abuzz this week over the hearing going on in Judge Kevin Fine's court about the death penalty. Specifically, this morning, the Chronicle seems aghast that District Attorney Pat Lykos would order her appellate division (represented by Alan Curry) to remain silent during the hearing . The Chronicle calls Lykos' move "bold". I'll call it something else -- smart. Yes, I know you are probably shocked that I agree with Pat Lykos on something, but let's look at what other choice does she really have in this matter at this point? The Harris County District Attorney's Office has registered their objection to the hearing taking place at all. They have put those objections in writing and Judge Fine has overruled them and is proceeding with the hearing anyway. So, the move Lykos and Company are making is really the only one they can play now. They don't believe that the hearing has any legal value be
19 comments
Read more

By Murray Newman - December 01, 2010
Friday marks the last day of 248 th District Court Chief John Jocher from the Harris County District Attorney's Office. Out of all the prosecutors who have left the Office over the past two years, for some reason, John's leaving has kind of brought about a melancholy feeling for me. I couldn't be happier for him as he heads to the Federal side of the street, and I know that he'll be happy there. But John is like a brother to me, and seeing him leave that place for good almost feels like losing family. John and I interviewed for the job of Assistant District Attorney on the same day back in the summer of 1999. We'd never met before, and we didn't actually meet that day either. I remember seeing him waiting for his interview with the hiring committee, though. A few weeks later, on August 16 th , we both started on the same day as prosecutors. I was sent to the Justice of the Peace Division and he went the Juvenile route. We didn't really get to know
24 comments
Read more
More posts