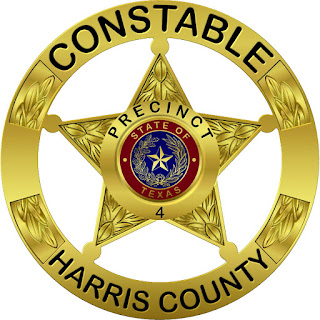 Last Friday, I was walking out of the stairwell at the Civil Courthouse, just in time to see my friend and fellow defense attorney, Bryan Savoy, attempting to assist a young woman, who was clearly beginning to have a grand mal seizure.  As the seizure began, someone ran down the hall and grabbed the first person in uniform that they could find.  That person ended up being Sgt. K. Rodriguez of the Harris County Constable Office-Precinct Four.

Sgt. Rodriguez rushed to the young woman's aid, and took charge as we lowered her off of the bench where she had been sitting onto the floor.   Sgt. Rodriguez positioned her body over the young woman until the seizure stopped and then stayed over her, as the poor lady was sobbing and clearly distraught.  Sgt. Rodriguez was extremely calm and soothing as she told the young lady about her own family members with seizures and how it was nothing to embarrassed about.  She held the young woman and patted her reassuringly and told her that the paramedics were on the way.

Sgt. Rodriguez asked her if she normally had multiple seizures in a row, and the woman said that she did.  So Sgt. Rodriguez positioned herself to be ready for the next one, and encouraged the woman not to struggle against it, if she felt it coming on.  It seemed like we waited forever for EMS to arrive, but Rodriguez stayed with her the whole time, despite offers from court bailiffs to take over.  Throughout it, the woman kept her hand on Sgt. Rodriguez's leg, and kept patting it.

As EMS took the young lady away, Rodriguez went with her.  She had never lost her composure or her compassion.  I know that I'm not adequately describing what a chaotic and potentially dangerous situation it was.

But Sgt. K. Rodriguez managed the situation like a superhero.  She deserves to be commended.
Posted by Murray Newman at 7:56 PM

Thank you for your kind words about Sgt. Rodriguez. I have worked with her for many years and can truly say that she is an awesome co-worker and friend.