Rearranging Deck Chairs on the Titanic

I had a moment of confusion this morning at the Harris County Criminal Justice Center, when I hopped on one of the building's infamous elevators.


The normal, dark wood paneling with the flimsy metal borders and carved graffiti interior had been replaced with shiny metal.  The dark gray flooring had been replaced with a pinkish tile.  It looked space-aged compared to the previous bucket of bolts that had been the trademark of the inefficient transport system that we have all come to know and hate at the CJC. 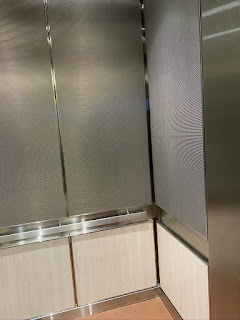 The little floor monitor thingy that (on days when it was working) told elevator occupants what floor we were stopping on no longer utilized the glowing red, digital numerals found on 1990's-era alarm clocks (and timers for bomb countdowns in spy movies).  It had been replaced by a cool new video monitor that showed the floor we were on, superimposed over an image of the CJC! 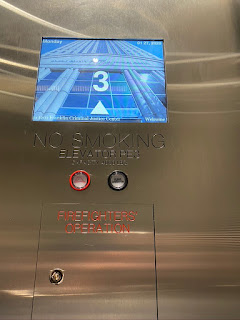 It was all very exciting.  In the two years and five months since Hurricane Harvey, we are finally seeing some exciting signs of improvement!  I almost felt like I was in the elevator of someplace fancy, like a bank or some other place that cares about safety and efficiency.  I wasn't used to such luxuries at the Criminal Justice Center.

Of course, we didn't really need for the repairs on the CJC to make the elevators prettier.  I think that pretty much all of us would settle for an ugly elevator if it, you know, worked.  I've heard many people complain about the number of elevators not running on any given morning, but I've yet to hear someone say: "Sure these elevator work fantastic, but they are so aesthetically hideous that it ruined my entire criminal courthouse experience today."

Making the new elevators pretty and modern is pretty much akin to rearranging the deck chairs on the H.M.S. Titanic.  Two years later and all of the felony courts are still splitting time between the CJC and the Civil Courthouse because many of the courtrooms aren't ready for occupancy.  Absolutely nothing has been done to alleviate the backlog of defendants waiting in lines just to get in the building every morning.  In an obvious gesture of surrender to the masses, the County has constructed some sort of temporary covered walkway for the lines that form outside every morning.

The building has become the architectural version of a mullet.  Space-age elevators on the inside.  Civil War-era shelters in the front.

I'm trying to figure out how this went down during the construction planning.

Contractor # 1:  I assume our first priority is to get the courtrooms up and running as quickly as possible?  Or maybe restructuring the entry to increase the efficiency of getting people in and out of the building?  Or getting the elevators in working order so that we don't have so many frequent breakdowns?

Contractor # 2:  No.  First off, we've got to make the elevators look cool as shit.

I guess I shouldn't be too surprised by the aesthetic elevator improvements.  After all, the first major step they took in the post-Harvey rebuilding efforts was to install a Fuddruckers in the basement of the Civil building.

I've heard from some insanely optimistic people reliable sources that the building is supposed to be back to "normal" by August of this year, but I'll believe it when I see it.

Maybe it would go a little faster if the powers that be realized we don't need a pretty building.

We just need one that works.

By the way, the over/under on when a disgruntled defendant smashes the glass on one of those fancy new floor displays is six business days.   I'm taking the under.
Posted by Murray Newman at 2:19 PM

Email ThisBlogThis!Share to TwitterShare to FacebookShare to Pinterest
Labels: CJC Problems, Flooded Justice, The CJC Elevators, The Lines at the CJC

Clearly a sells pitch to the previous tenant of floors 4-6. We can all agree the lone elevator is nicer than anything they have over at KimbraWorld.

Unknown,
Well, God knows that it doesn’t take much to inspire me to write a snarky post, but no, I’m not entirely up-to-date on my elevator installation, now that you mention it. Do I understand you correctly that to fix an elevator, the cab must be replaced? I mean, it HAS been a minute since I’ve last installed one, but that seems crazy to me. However, if that IS what you are telling me, then I must admit that I do not have the personal knowledge to rebut the assertion.

It seems more like an aesthetic change rather than a substantive one, to us elevator-installation-ignorant folks.

Unknown, are you saying they've fixed the elevators beyond aesthetics? If so, that is shocking Man Bites Dog news and you should lead with that instead of just hinting.

Until I get confirmation of genuine improvement, I'm with Murray and asssume this is an exercise in turd polishing.

People stuck on the new elevator for an hour this morning... Lasted one day

Since people are jerking everyone's chain today, I'm jerking Murray's for putting the RMS Titanic in the Royal Navy. HMS (Her Majesty's Ship now and His Majesty's Ship in 1914 when Titanic sunk) designates a ship of the Royal Navy. It's similar to USS as a designation for a US Navy commissioned ship. Titanic was never a Royal Navy ship. She was a passenger liner belonging to the White Star line.
RMS on the other hand stands for Royal Mail Ship, the designation for a merchant ship carrying the mail. Titanic was carrying Royal Mail and was therefore a RMS.
Just pulling your chain, Murray.
You are right in another thing. What's happening at the CJC is just rearranging the deck chairs on Titanic. The building has been a disaster since the day it opened and it's not likely to get any better.
The county would be better off tearing down the Family Law Center and building a proper CJC on that whole block. It's footprint would be big enough to allow for escalators like the Civil building and a proper set of elevators. But, we're not in white shoe firms that make big campaign contributions to the powers that be.

My understanding was the cabs needed to be replaced because the old elevators were a bizarre size, with proprietary hardware and the company is out of business. Every time a new elevator part was needed, it had to be custom machined. So the solution is to completely replace the entire elevator system, cabs included.

The Empire State Building was built in one year. No excuses for our situation. This is no mostly a Harvey problem as 5he issues existed before Harvey with a large proportion of the elevators out of service. I strongly suspect that Harvey was attempted to be used to get federal funds for most of what was needed by the commissioners, but they got called out on this problem really caused by malfeasance and neglect over many years.

I remember When I just passed the bar and practicing in ‘76 in the original courthouse there were elevator operators. One gentleman always referred to his passengers as “judge”. He was an elderly Black man that wore a glove to facilitate closing the metal gate on the original elevators. One day when I was the only one on the elevator with him I asked him why he addressed everyone as “judge”. “I don’t know all of the judges and I want to be respectful to all of them so to cover my ass I refer to everyone as “judge”. Job security.