Of Chemo and Diapers

So, tomorrow (Monday, December 9th) is the filing deadline for the 2014 elections, and I imagine that things are about to get hopping around the blog again with the different candidates.  Before we get into the grind of that, I thought I would do a quick update on why things have been so quiet here for the past couple of months.

Although I've posted very brief posts here and there on a couple of occasions, I've been pretty neglectful over here.  I've had several outstanding reasons, I promise!

As I posted here back in September, I had a brief and successful battle with leukemia over the summer.  I was officially declared to be in remission when I wrote that post.  However, as part of the complete treatment, I had to do eight follow up weeks of treatment with a drug called Rituxan to help ensure that the leukemia didn't come back.

The follow up treatment was no big deal, whatsoever.  I had about a three hour IV drip that I did on eight consecutive Mondays.  Since Rituxan sometimes causes an allergic reaction, the nurse would administer an IV drip of Benadryl prior to the Rituxan, and the Benadryl would usually put me right to sleep.

I've often thought that my life seems to play out like a long-running TV series.  I get done with one season of drama and roll straight on into the next one.  This was going to prove to be no exception:  My last scheduled treatment was on Monday, October 28th, which was a good thing since my wife was due to give birth on Wednesday, October 30th.

The week preceding the 28th only added to the drama.  I tried a week-long murder case in the 185th and the jury had found my client guilty that Friday (October 25th).  When we broke for the weekend, my client was testifying on his own behalf under my direct examination.  Judge Susan Brown had told the jury to come back the following Tuesday, so that I could make my Monday afternoon chemotherapy appointment.

My oldest son's birthday was that weekend and we had scheduled a costume party in the backyard at his mom's house.  The party was on Sunday and Luke's grandfather spent a large amount of time setting up tables and decorations outside in the yard all day Saturday.  Everything was set up for an easy start to the party the following day.

Of course, on Sunday morning at 6 a.m., I woke up to the sound of a torrential rain storm that seemed just slightly less ferocious than Hurricane Ike.  In all of our planning for the birthday party, none of us had bothered to check the weather.  That was a really really big oversight.

Miraculously, the rain started to taper off around 10 a.m., and Luke and I went to his mom's house to begin the world's fastest clean-up operation.  By that, I mean he watched television and ignored requests to clean his room while Sylvia and I frantically dried off every item in her backyard and moved it to the dry land of her driveway.

Amazingly, we pulled it together in time for the party and we had a successful celebration.  By Sunday night, I went to sleep exhausted, but proud of the effort.

On Monday morning, I had to be up before the crack of dawn to travel to Brazos County for a quick case setting.  The prosecutor and Judge Travis Bryan were more than accommodating as they let me reset my case quickly and get back on the road to Houston in time for my afternoon chemo.

My wife had a routine check up with her OB/GYN in anticipation of being induced into labor two days later on Wednesday.  Her appointment coincided with my chemo treatment, so I couldn't accompany her.  I went to the Oncology Consultants and started the Benadryl drip.

And that's when things got interesting.

Shortly before zonking out, my wife sent me a text saying that they wanted to move up the induction date to Tuesday and she was not happy about it.  I didn't blame her -- we still had a lot of stuff to do to get ready for a new baby.  I didn't have much time to respond before I fell asleep.

When I woke up two hours later, there were a lot of text messages piled up in my inbox.  That was a bad sign.  As it turned out, her blood pressure was high and the doctors were keeping her for observation.  She was optimistic that she might get released.  I wasn't.  There was no way the doctor was going to send her home when her due date was so close.

By the time I finished the chemo drip, I had marching orders to go straight home, pack our bags and come back to the hospital immediately.

In the space of two hours, I was able to drive home in Houston traffic, pack our bags, text Judge Brown and the prosecutors (telling them that I might not be able to make it to trial in the morning), pick up dinner and get back to the hospital.  Once we ate dinner, they began giving my wife the induction drugs.

We were both up pretty much all night and active labor started around 4 o'clock the next morning.

Right around 8:30 a.m., my wife delivered a healthy 9 pound, 4 ounce boy.  We named him after her late father.

About an hour later, I got a call from the 185th District Court wanting to know when I was going to be there for trial.  In all the excitement, I hadn't confirmed that I wouldn't be coming in.  Oops.

So after a few bumps in the road, it looks like everyone in my family is healthy and happy.  Luke loves his new brother, Smith, and Smith seems relatively content in life.  He's growing exponentially and seems to love sleeping -- as long as it isn't at night.

I don't know if it was the leukemia or just the fact that I'm 8 years and 3 days older than I was when Luke was born, but this parenting stuff is EXHAUSTING!  My energy level was much higher during chemo than it is with our little bundle of insomniac joy.

All in all, however, life is fantastic.  I'm tired but still grateful and happy for all the blessings in my life.

I know this post doesn't have anything to do with the CJC, really, but now you know where I've been lately.

I'm sure the new election season will have me writing much more frequently. 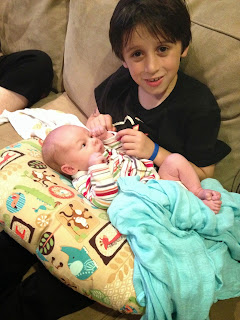 Is anyone else just a little uncomfortable with the defense attorney texting a judge thing?

Here's a newsflash - prosecutors and defense attorneys and judges frequently have each others' cell phone numbers. Instances like this are why.

Grow up and join the new technological world.

Hey Murray here's hoping your life is like a LONG running TV series! Stick around, buddy!

At least all your "segments" have had a happy ending. Glad you are going better and thank heavens Smith looks like his mother.

Lest we forget that some defense attorneys are friends with Judges (as are DAs).

Glad you are back Murray, blog has gotten boring....

I was there for some of this, so I feel Almost Famous.

Luke and Smith are very lucky to have Sylvia, you X2 and Emily as (respective) parents.

Anon 2:07, note that he texted the Judge AND the prosecutors. When everyone is a part of the communications, there's nothing to question.

Tick tock is the sound a clock makes.

Happy Holidays to all.

"Tick tock" was the first set of words I ever said as a baby, ironically.

I like how he varies the spelling, too. Hard to misspell a sound effect.

Give him long enough and he'll even misspell Ogg.

Been doing the chemo thing myself this summer. Know about the Bennie stuff. Glad yous is doing well. Mine also It has been an interesting trip and have meat some people I would not have met before.

Run for a bench