Of Insults and Injury

As anyone who knows me or reads this blog knows, one of my favorite hobbies is harassing my friends.  Whether it be mocking their "Hollywood career," their sweater vests, their hair, their unnatural back hair, or their lack of holiday cheer, I like picking on my friends in what I hope is taken as a good-natured manner.

In doing so, I would be very remiss if I did not have a sense of humor about my own embarrassments.  I've heard every bald joke, divorce joke, paleness joke, and pudgy joke that I can think of.

So, this past Friday, I inadvertently decided to give you some new material.

Emily and I took the Boy up to Camp Creek, which is my favorite place on Earth.  It is a tranquil lake north of Bryan where my parents have a lake house.  It redefines rustic.  There is no marina.  The ski area is tiny.  It is very quiet and peaceful there.

But no place is perfect.

There are plenty of critters running around there -- deer, possums, snakes, raccoons, and almost every stinging insect known to mankind.  Even my mom got bit by a copperhead once back in the '80s.

The most rampant of these nuisances, however, are the wasps.  It is a constant struggle fighting them off.  They try to invade the house.  They are most prevalent at the boat house, however.

On Friday, I made the ill-advised choice to take on a wasp with a broom at the boat house.  Here is the crime scene: 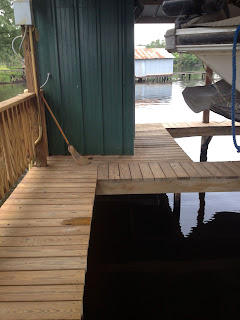 The wasp had no problem dodging my feeble swipes with the broom.  He ducked back.  He dodged right and left.

And then he went straight for my exposed pasty white stomach.

Instinctively, I stepped back with my left leg -- only to realize (too late) that I was no longer standing on the deck.  My 215 lb. out-of-shape body went down like a sack of potatoes.

The whole incident happened in under a second (which is still twice the time that Womble had on screen in Pearl Harbor).  The results, however, are as follows: 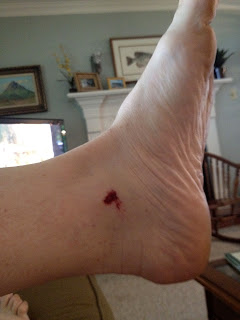 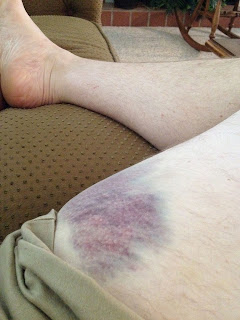 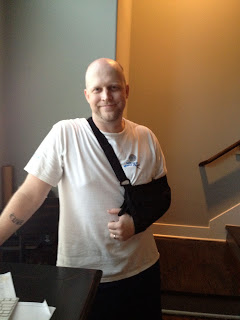 Nothing is apparently broken, but the doctors in College Station told me that I need to get an MRI once I get back to Houston.  As of this writing, I can't lift my left arm up.  The doctor said something about my labrum being damaged.  Prior to Friday, I didn't know that men had labrums.

So, if you see me looking pathetic around the CJC tomorrow, you now know why.

Up at the lake tonight, I'm sure there is a proud wasp telling its family about the time it made a human vanish into thin air.

Sadly, this is not the worst run-in with a stinging insect that I've had at Camp Creek Lake.

I was once stung by a ground hornet when I was in 6th grade.

The day before school pictures. 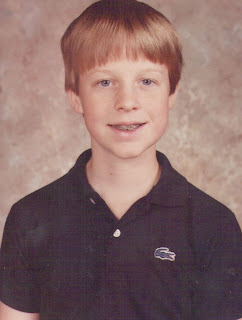 Awww - what a cute little kid you were. And I must say, you certainly paid a painful price for trying to hurt that poor little stinger who had done nothing to you. (I laughed out loud imagining the wasp flying to the nest to tell everyone how he punked you. ; 0 ) Thanks for the funny & feel better.

wait, the doctor said your labia is damaged? that must be painful.

Try to get it on film next time

Self-deprecation is one of the best traits a person can have. Faults can be overlooked if you can make fun of yourself. In my own experiences, it is always stupid-a*! stuff like this that is the basis for my worst injuries!

Hope you get better soon.

It is always best to laugh at yourself before--and louder--than anyone else does...

With me, it was all about pizza. As I rushed to answer the door for the pizza delivery man, I tripped over the (seldom-used) elliptical machine, breaking my left wrist, tearing up my right shoulder, and breaking a toe. Yep. For pizza.

I am sure that wasp is busy entertaining his wasp buddies with tales of your mishap.

Hope that you feel better soon.

As the years go by, you will recall this story more as a HUGE winged stinger with fangs and 5 foot wing span, and instead of pasty white middle, it will be that wash board six pack that was tanned to perfection. Good to see your ability to type with one hand is still good, thanks for sharing the laugh. Feel better, oh and shoulder tears of any kind take a long time to rehab and are the worst (I work in the medical field so I see it a lot_.

The best defense against wasps is two cans of wasp spray kept nearby at all times. The newer foaming kind even keeps them from flying off the nest.

Glad you didn't step on a water moccasin.

Get well soon and write something more about our favorite targets. Surely they've done something stupid recently...

Rich. The whole time I was reading your story I kept thinking back to the day I chased a ground hornet around a greenhouse and then you finish up with a like tale except I managed to kill it without getting stung.

I just finished rehabbing a shoulder and torn glenoid labrum. Take your time with PT. Not a fun injury.

See below about labrum. Frank Bynum was so far off-base after all:

.
Labrum - Wikipedia, the free encyclopedia
Labrum (Latin for "an edge, rim of a vessel") can refer to: Labrum (arthropod mouthpart), a lip-like mouth part Labrum (architecture), a large water-filled vessel or ...
en.wikipedia.org/wiki/Labrum

I'm glad to see you're back to blogging on a regular basis--there is a lot more to talk about than just Lykos, which seemed your sole purpose for so long.

But the next time I see your naked thigh, it had better be in a bad cell-phone picture having butt-sex with Arthur Seaton in an airport bathroom, printed on Big Jolly's website in order to discredit you from ever going after one of his candidates again.

Which is to say, I had better not ever see it again.

Wait a minute! Your mom got bitten by a copperhead and lived to tell about it and you don't even repeat the story here? With all due respect to your broken l-thingie, I want to hear the copperhead story!

(BTW, sure hope you're feeling better and healing. No, you do not need to show us the bruise turning green. . .)

OMG and OUCH!!! X's 100! You really lost that battle. Hope you feel better. Boy that brought back a childhood memory. I was 8 years old looking for a "lost" turtle my brother and I took from a creek and placed in our back yard. I went to grab a tree branch only to wrap my hand around a yellow jackets nest. Got stung 11 times in the hand and wrist.