The Changing Shape of Things -- Part Two: Exposure at the CJC

I've heard from multiple people this morning of a potential COVID-19 exposure to the Harris County Criminal Justice Center.  An e-mail went out from Ed Wells, the Court Manager, at 7:25 a.m., notifying people that a prosecutor in County Court at Law #1 had been exposed to a family member that had tested positive for the virus and presumably had then come to work.

Court #1 is on the 8th floor of the CJC, so the response was to recommend shutting down all courts on the 8th Floor. 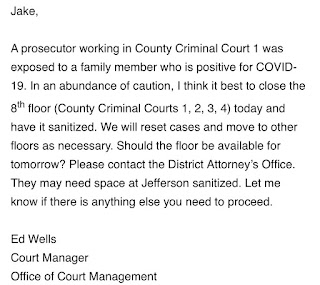 Now, you can call me overly critical, but I'm not real sure what closing down the 8th floor does.  I'm going to guess the prosecutor didn't walk up the stairs to the 8th floor.  I'm sure he or she took the elevator with a group of other people.  I'm sure he or she came in the front door and walked through the lobby to get there too.  Closing down the 8th floor at this point does about as much good as putting a Band-Aid on a gunshot wound.

You mean, you may want to check to see about sanitizing the area where the possibly infected prosecutor worked alongside a few hundred of his or her fellow employees?  Those employees that may have spent more time around that prosecutor after court because good old Kim Ogg and Vivian "Business As Usual" King wouldn't let non-essential prosecutors work from home.

It has been reported that they now have a guy in a HAZMAT suit of some sort checking people's temperature as they enter the CJC this morning. 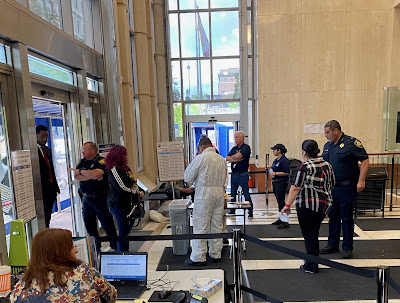 Did it occur to them that what they should be doing is letting the people trying to come into the building know about the potential exposure?  The idea of taking folks' temperature when they come in is to prevent COVID-19 from coming into the building.  Ed Wells' e-mail indicates that it is possibly already there.

They are warning the wrong damn people.

I want it to sink in that the prosecutor who may have potentially exposed the populous of the CJC to  COVID-19 is a misdemeanor prosecutor.  A misdemeanor prosecutor handling the lowest level of crimes.  The vast majority of the misdemeanor courts aren't even holding dockets.  Arguably, he or she should have been one of the first people told that they could work from home.  If that had happened, maybe the CJC wouldn't be going through this.

Yet Kim Ogg and Vivian "Business as Usual" King still steadfastly refused to make any arrangements for the Office that allowed its employees to distance themselves from each other, protecting their own health and the health of their families.

And Vivian King had the nerve to be angry at me when I said she was the last person who should be handling a crisis for the Office.

On a related note, has anyone heard anything from Kim Ogg directly lately?  All of the information coming from the Office seems to be coming from King, JoAnne Musick, and Jim Leitner.  Has Press Conference Kim suddenly become camera shy?

All of this is absolutely infuriating.  While the rest of the world, the rest of the country, the rest of the State and County, took drastic measures to slow the spread of COVID-19, the Harris County District Attorney's Office's only response was to put hand sanitizer on backorder and literally, tell the employees that it was "business as usual."

I mean, the Ogg Administration established very early on that it didn't care much about or for its employees, but this has jumped over into a lack of concern about the general public.

The fact that this is happening is inexcusable.

This is infuriating. Someone needs to call the Chronicle. And the ADAs need to refuse to come to work until the administration finds a better solution. They won't, because they are good soldiers. But of all the demoralizing things that administration has done, this is the worst.

And, please, oh please, someone find an electable opponent for Ogg in 2024.

"Please note that there is no immediate health crisis within our office. DA Ogg is concerned about the health and safety of each of us and us acting in an abundance of caution."

The DA's office didnt notify the courts, becuase the ADA told court staff directly. While many think court management has the ability to close a building, and the DAs office acts like they have the authority to do so, closing a county building takes a higher authority.

There is an electable candidate now and her name is MaryNan Huffman. Your vote matters.

So what exactly is Hidalgo waiting on to issue a lockdown order? Dallas County, Austin, Waco, and I hear San Antonio is next. How did Harris County get stuck with such inept leadership (rhetorical question)? Sly & Lina are a match made in heaven...

This is just a continuation of the way Ogg and King have viewed the prosecutors since day 1. I mean, King told them on day one they were all crooks and thieves and things were gonna change. This means the ADAs must come to work daily or else they'll steal from the county or convict innocent people. When this is the view that you take of your employees, it shows from day one until now you don't give a damn about the people entrusted to prosecute crimes in Harris County. And King was right: things did change. The place is a crap hole now and the turnover is so high that it's laughable.

Kim Ogg is a strong opponent and the Democrats who tried to challenge her needed to run better elections and do more than they did. I stood behind any of those folks (except Lloyd Oliver), but most had no clue what they were doing. If the Republican loses this fall, there had better be a stronger, more knowledgeable, better staffed and funded, game-face-on candidate for 2024.

Just approached Judge Anastasio who was covering for Judge Martin on something simple on a case.

We need to be in better contact email wise with the clerks to help expedite things, but this is how the system should work.

And Murray, not sure if this isnthe right platform, but many of the HPD, METRO, HCSO and Constables we work with downtown everyday do not have the needed protective equipment, especially masks. Not sure if anyone has any contacts to do anything but I am in to help whatever I can do