The Changing Shape of Things - Part One

Many things have changed in the six days since my last post about the COVID-19 Coronavirus and the Harris County Criminal Justice Center.  I'm guessing that this update about the state of things will probably be the first of many as things continue to adapt to what is going on in the world.

1.  The vast majority of Judges are waiving court appearances for bond clients in most Instances. I'm not 100% sure that all judges are following this rule, but every judge that I'm currently dealing with is doing everything that he or she can to keep people out of the courtroom.  I have not heard of any judges that are not following this plan, but I can't swear that all of them are. Appearances are being waived and electronic resets are being encouraged.  The only exception that I've seen on this is first appearances for clients that have just bonded out of jail.

2.  Judges are working to get non-violent offenders out of custody if possible.  Defense attorneys should be doing the same.  I know of at least one District Court Judge that went through the cases pending in his court and reviewing which ones he could grant personal recognizance bonds without risking public safety.  He did this sua sponte, but defense attorneys should be doing the same.  I've been going through all of my clients's cases that I can make an argument for a bond reduction or a PR bond for and filing Motions to Reduce Bond.  As a side note, I will again point out that accepting collect phone calls from your clients is a fantastic way to communicate on these types of issues.  Check out www.securustech.net if you want to set it up.  It isn't expensive and it is totally worth it.

3.  Speaking of e-filing . . .  A week or so ago, Harris County District Clerk Marilyn Burgess rolled out a fresh new design for her office's website.  It must have been designed by a colorblind individual.  Things that were once easy to find are now against backdrops that make the tabs more difficult to see than the hidden images in those 3-D posters that used to be popular 20 years ago.  Today, as attorneys are trying to access the District Clerk's website so they can work remotely, the site is alternating between working at a snail's pace or not at all.   Burgess is really going to need to get that together quickly to keep things working.

4.  The CJC is more or less a Ghost Town.   I drove in yesterday to approach judges about bond issues on two cases yesterday and it was kind of spooky.  From the sign at the garage that proclaimed jury service was canceled to the mostly empty elevator banks, it felts like entering the opening scenes of a zombie movie.  There were only a handful of bond defendants in the courthouse and they were quickly given resets and sent home.  Judge and court staff were asking people to keep their distance from each other and the bench.  I made the mistake of coughing once (it was allergies, don't freak out) and was immediately maced with Lysol by a court coordinator who shall remain nameless.  There was definitely a strong feeling that we shouldn't be up there.

5.  Teleconferencing is the new Bench Conference.  As I mentioned above, I filed a couple of Motions to Reduce Bond on some of my clients, and I'm going through all of my pending cases to see if there are more I can do.  I e-filed them (through the State's service, not the District Clerk), served the prosecutor with e-service, and e-mailed the coordinator to notify her.  About an hour later, the Judge called me and we had a teleconference.  The prosecutor was in court and I was on speakerphone.  It went pretty smoothly for a first attempt.

6.  Speaking of the prosecutor being in the courtroom . . . Since I was supposed to be out of town this week and then on Spring Break, I was calling in from out of town when I presented my Motion to the Court telephonically.  The prosecutor, however, was physically present in the courtroom.   Again, I will point out to Harris County District Attorney Kim Ogg, that this wasn't necessary.  The prosecutor could have phoned or conferenced in by Internet just as easily as I did.  Thus far, Kim Ogg's only concession for her employees is relaxing the dress code.  That's pathetic. 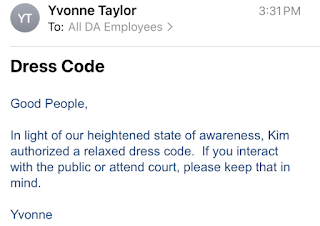 7.  Speaking of poor crisis management by the District Attorney's Office, I had the most entertaining conversation with 1st Assistant/Chief of Staff/Minister of Propaganda Vivian King last week!  So, here's a funny story.  Last week, in response to Jim Leitner citing Vivian King's approval of an e-mail he was sending to the Office, I made the following Tweet:

Now, I said this with a keen awareness of numerous moments of mismanagement and out of line priorities exhibited by La Viv over the course of her tenure with the Ogg Administration.  From holding onto some Federal defense cases after taking her oath as a prosecutor to handling a little family law matter for a criminal court judge (that in my opinion created a potential conflict of interest for the Office) to expensive espresso machines on the public dime to failing to recuse the Office on a case that she had a vested personal interest in, the past few years have changed my opinion of Vivian for the worse.  I have a great many things that I could add to that list, but I won't at the moment.

So, after sending this Tweet, I was not all that surprised to see Vivian on my Caller ID on Friday, calling to express her fury.

She started by cryptically letting me know that "someone" had told her that I had said she was the last person who should be handling a crisis.  Dammit, the Twitterverse is apparently not the secret-keeping vault that I thought it was.  I told her that she really should be focusing on managing the Office's response to the coronavirus rather than calling her critics on county time, to which she yelled "YOU DON'T KNOW WHAT TIME I TAKE MY LUNCH HOUR!"

She threatened to sue me, to which I replied that my opinion of her was not libel.

She threatened to file a grievance against me for criticizing her, to which I replied that I was criticizing her as an administrator, not as a lawyer.

She told me that I was just seeking publicity, to which I didn't think that her ill-fated stint on Sisters-In-Law would really get me that much attention.

She demanded to know who had told me bad things about her, to which I told her I wouldn't be feeding information to the "most paranoid, mean, and not-that-bright administration in the Office's history."

She finally just defaulted into yelling that she was Board Certified in Criminal Law and called me a racist for saying anything negative about her on Twitter.  She also accused me of "damaging the community," whatever that means!  It was a very volatile 11 minutes.

And in the end, it didn't change my opinion any.  Now, more than ever, I remain of the opinion that Vivian King is the last person who should be making these decisions.

8.  In all seriousness, outside of the District Attorney's Office upper administration, the Harris County Criminal Justice community is pulling together.  From defense attorneys doing whatever they can to keep their clients informed to the judges trying to make sure that Due Process is still happening to the rank-and-file prosecutors dutifully responding to e-mails and showing up for court, people are still working around the clock to keep the Justice System running.

As a side note, if you are otherwise unaware, the Harris County Criminal Lawyers Association (in a project being handled by the amazing Christina Appelt) is keeping a running list of all the relevant information regarding courthouse closings and other constantly changing rules at this website that is available to the general public.  That's a huge undertaking and Christina is owed a big "thank you!" for handling it.

I hope everyone is safe out there and that you and your families are corona-free.  I'll talk to you soon.
Posted by Murray Newman at 1:39 PM

Who needs links to information on the courts when you can have numerous giant pictures of Marilyn Burgess' face!

It’s not helping things that the Judges haven’t had a unified or quick response to this. I wish one of them would take the initiative to convince the naysayers that this is more serious than their docket size. Each court having a different policy that they post on Facebook at 10:30 PM on Sunday night is ridiculous.

You don’t like the picture of the old prune and the rainbow coalition? Lol.

HCDAO under Ogg is a mess. They bungled through Harvey and this will be no better. As you point out, it will be the line prosecutors who have to push through.

I felt La Viv's wrath years ago when I expressed to others that I didn't think she'd be a good judge (she was running for judge at the time). It got back to her and she made it super personal in no time flat. She is nasty mean when you cross her. And she still goes around talking about her ridiculous reality TV stint, as if she should be proud of the way she acted on it. Vivian is all about Vivian. She's not much different than Trump actually: petulant, petty, narcissistic, immature, retaliatory, etc.