Your Friday Dose of Irony [UPDATED]

By Murray Newman - April 20, 2012
We've all had a good laugh at Gary Polland's hypocrisy in criticizing Republican candidates who take court appointments to do criminal defense when he brought in over $400,000 in appointments last year.  Now, we can also have a laugh at Jared Woodfill who has joined the Juvenile or Family Court appointments list, as well. 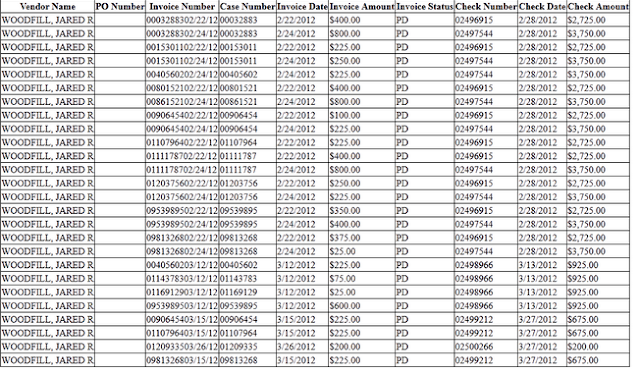 Both Woodfill and Polland have violently opposed the creation and continued existence of the Public Defenders' Office, and now you know why.

They seem to be a little worried that the more cases the PD's Office gets, the less money there will be to go around for them.  If the PD's Office continues to thrive, Woodfill might even be forced to sell his house in River Oaks.

Anonymous said…
I'm just curious but why are the check amounts so much higher than the invoice amounts?
April 20, 2012 at 6:49 PM

Jared Woodfill has never been on the juvenile appointments list. If anyone claimed he has, someone clearly 1) fell for it, and/or 2) gullibly or maliciously posted on this blog.

Mr. Woodfill isn't on the juvenile appointments list. Never has been. Not qualified to be on the list.

Someone clearly either posted this displaying great gullibility or malice--or both.

Presumably, these refer to the CPS work Woodfill has been doing in the family courts. If so, they aren't even cases the PD handles or would any way infringe upon.

Anonymous said…
If they were out of juvenile courts, the cause numbers would end with the letter "J"--per district court rules.

Anonymous said…
6.49, there are multiple invoices paid on one check. If you look closely, you will see the same check number on several lines.

Anonymous said…
Explain that, Murray.... Aren't all appintments (not the CPS stuff) coming from the Juvenile Judges for juvenile defendants? I am not an attorney.
April 20, 2012 at 8:45 PM

Anonymous said…
Polland and Woodfill are scared that the CPS cases will be farmed out to the PD like they did in Austin. It has saved Travis County $!
April 20, 2012 at 8:48 PM

Mark Bennett said…
A little bird told me that Polland (and presumably Woodfill as well) is afraid that the PD's brief will expand to include CPS cases.
April 20, 2012 at 9:19 PM

Anonymous said…
Can someone explain to me how seemingly overqualified attorneys like Hawkins (juvenile division chief for several years) applied to be on the juvenile appointment list but was not selected? That doesn't make any sense to me...
April 20, 2012 at 10:27 PM

Anonymous said…
ANON 8:33 pm
I can answer the question about payments to Lykos. Most of all the mileage, travel expenses for witnesses, payments for office supplies (entire office), and contractors are coded as payments to Lykos, but they are actually sent to vendors, travel agents, ADAs, etc. This has been the practice under the last several administrations.
April 20, 2012 at 10:31 PM

Anonymous said…
Murray.where can you find the campaign contributions to the juvenile judges? Follow the money.the money being paid out is rediculous
April 21, 2012 at 2:55 AM

Type in Woodfill Jared (no comma) and see what pops up. That is, unless you believe Murray has the computer prowess to hack into the County mainframe and input these numbers (which we know isn't true because he can't even file a dba).

As to the "case numbers"... Harris County must make up a new "case number" for billing purposes, because none of Woodfill's or Polland's "case number's" come back to anything when searched on DEEDs (civil or criminal). Someone needs to do a open records request for the actual invoice.

And Pat doesn't pay for office supplies from extra funds, that's part of the budget, which she still hasn't figured out how to manage. All mileage and travel expenses are supposed to be pre-approved via the commissioner's court. AND...when a DA gets reimbursed for mileage or travel expenses, it's paid to that ADA - not Lykos. Type in Bridgwater to see the funds sent to him - most likely all those are for hotel/food/transportation to training trips.
April 21, 2012 at 7:59 AM

Anonymous said…
If I was that twerp I would not want someone messing with my income either. Dang my tax dollars support another idiot.
April 21, 2012 at 8:06 AM

Anonymous said…
Woodfill doesn't do juvenile appointments. Nor does he do CPS work. Check your facts Murray.
April 21, 2012 at 9:11 AM

Anonymous said…
does anyone know where the requirements and procedures are posted for CPS appointments? I can't find them online.
April 21, 2012 at 9:13 AM

Anonymous said…
You may not like Gary Polland, but the man works his ass off. He takes appointments in criminal, juvenile, family court, estate court, and mental health court. You too could do the same if you wanted to work 10-12 hour days and hire associates and support staff.
April 21, 2012 at 9:15 AM

Anonymous said…
No one is suggesting Murray is lying about Woodfill getting appointments. What is being misrepresented apparently is 1) that these appointments come from juvenile courts 2) that JW is on the "juvenile appointment list" and 3) that these have anything to do with PD's office. There exists no plan for PD to rep kids in CPS cases. Not even Austin does this.
April 21, 2012 at 10:11 AM

Anonymous said…
Woodfill's large straw swilling at the public trough is another prime example of how Judges suck up to certain politicos. They scratch each others back using rolled up dollar bills from the taxpayer pockets.

Anonymous said…
Notwithstanding the criticisms leveled at Polland and Woodfil, the real "villians" in this equation are the judges who continually enrich individuals for the "services" which they allegedly provide. Only one anonymous blogger (4/21/12@2:55 a.m.)has pointed out the real issue, that of the enablers, the judiciary. The extent of abuses in the ad litem system on the civil side (e.g. juvenile and probate matters) had long existed and were well known; they were much more rampant than in the appointment system on the criminal side of the docket when I practiced. Moreover, through the years there has been a significant legislative effort to insure more effective representation for indigent criminal defendants (see art. 26.04-26.052, TEX.CODE CRIM.PROC.). To my knowledge it is still the "good old boy" system on the civil side. As noted by a prior blogger, the apparent failure of the juvenile judges to place Bill Hawkins (a former Division Chief of the HCDAO juvenile division) on the juvenile appointment list demonstrates the quality of "lawyering" these judges are seemingly seeking.
Calvin A. Hartmann
April 21, 2012 at 11:22 AM

Anonymous said…
The "defenses" raised herein are interesting, but ring hollow and are meritless - they remind one of a scene from the "Return of the Pink Panther". For those who might remember Inspector Clousseau berates a "blind" organ grinder (actually a bank robbery look-out) for soliciting with his "minkey" without a permit. The organ grinder claims that it not his "minkey" and moreover that it is actually the "minkey" who solicits and not him. The organ grinder claims that he merely accompanies the "minkey" with music. He contends that he doesn't need a permit because he is just playing music while the "minkey" is actually the businessman collecting the money. It is left up to your bloggers as to who they might characterize as the "minkey" and who they might characterize as the organ grinder in this discussion.
They will probably have a tough call.
Calvin A. Hartmann
April 21, 2012 at 9:40 PM

Anonymous said…
9:15 - Polland only "works his ass off" in going from court to court to sign resets. I've been dealing with him for years, and I've never seen him put in work on his cases. Don't confuse taking a lot of cases with working on a lot of cases.
April 22, 2012 at 8:44 AM

Anonymous said…
I spend most of my time in the family courts, and I can attest that Jared Woodfill has started getting ad litem appointments there in the past year, mostly out of one or two of the family courts. Seems like most of them are in CPS cases, but there are others involving private litigants.
April 27, 2012 at 4:22 PM 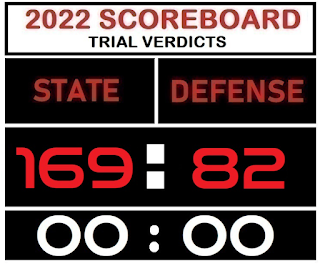 It's just so damn hard being a prosecutor these days.   At least, it is in Harris County. It was so much easier back when I was there.  Our judges were almost ALL former prosecutors.  The rulings all went our way.  We had people who trained us on how to try cases.  We went to trial a lot.  We won a lot.  It was crazy!  When I asked my old division chief researched what the win/loss ratio was during our tenure at the Office back in the day, she told me I learned that it was somewhere in the low to mid-90% win rate. These days, those stats are a bit different.  My friend, Jeff Ross, at his Show Me the Justice  blog keeps a running tab of the win/loss column.  Here are the current stats for 2022 as of this writing: That translates into a little better than 67% win rate for the State.  If this was a report card, it would be a failing grade. A quick glance at the wins and losses for last week over at Show Me the Justice profile five guilty verdicts for the State and seven not guilty
Read more